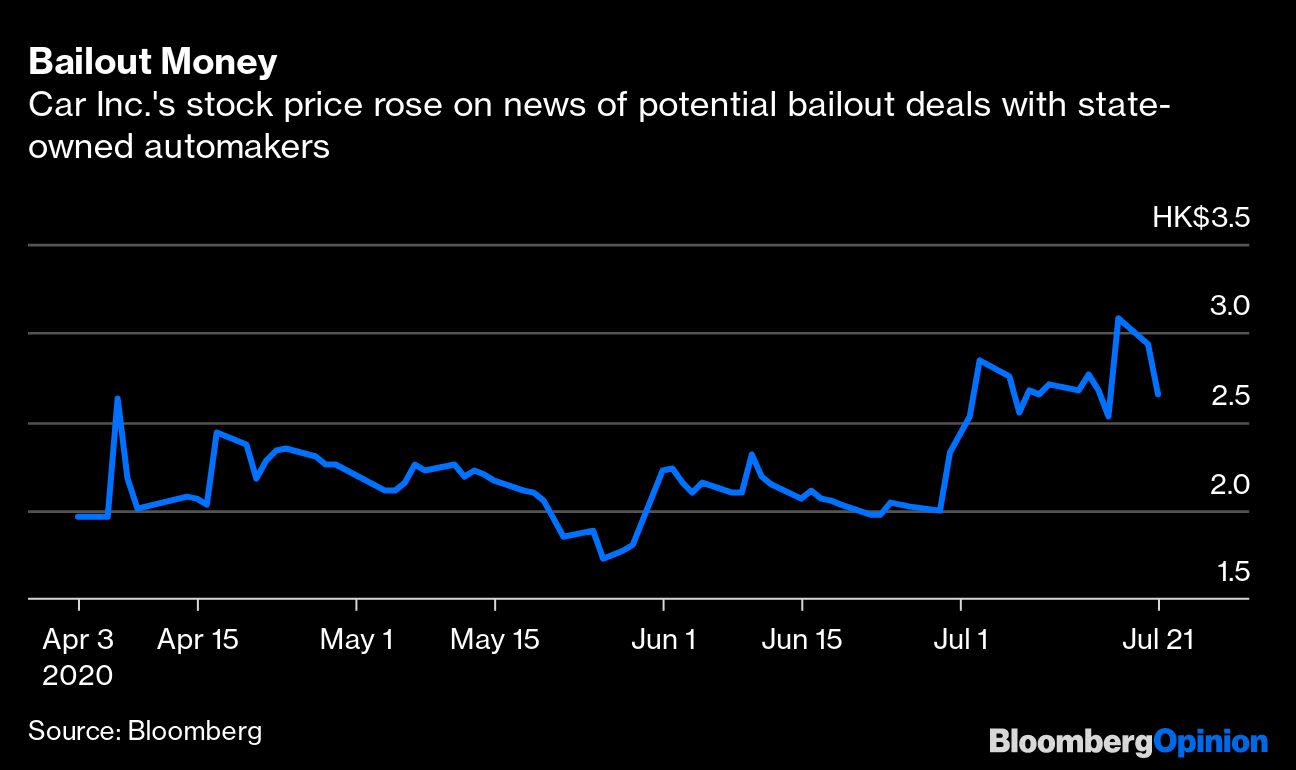 (Bloomberg Opinion) — When was the last time you encountered a white knight? Hiding out from Hong Kong’s latest wave of the coronavirus, I haven’t seen a human for days, forget about getting rescued.

China Inc. is probably feeling the same way — too many damsels in distress and not enough white knights to go around. More likely than not, many bailout deals will fall through, breaking our hearts and wallets.

This sort of uncertainty is unfolding at Car Inc., which once shared a chairman with scandal-ridden Luckin Coffee Inc. The auto-rental operator has been flirting with not just one, but two state-owned car manufacturers for bailout money. On May 31, it entered a “non-legally binding” strategic partnership with Beijing Automotive Group Co., only to switch gears a month later to SAIC Motor Corp. After SAIC terminated that deal Monday, sending Car Inc.’s dollar bonds tumbling, the rental company decided to settle down with BAIC after all. BAIC will replace UCAR Inc. — controlled by the very same embattled former chairman, Lu Zhengyao — as the largest shareholder.

That isn’t the end of the story. The BAIC deal is subject to a number of conditions before closing, including regulatory approval of the UCAR share sale. Just an hour after the encouraging BAIC news, Car Inc. disclosed that UCAR was being investigated by securities regulators over “suspected violations of information disclosure laws.” Car Inc.’s shares tumbled Tuesday.

Amid the mainland A-share stock frenzy earlier this month, Xiao Gang, former chairman of the China Securities Regulatory Commission, warned against companies putting out “frivolous” restructuring filings like these. Such hot air balloons only end up hurting investors, he said.

Then consider Tahoe Group Co., a luxury home builder with 56 billion yuan ($8 billion) of debt due this year, but only one-tenth of that in cash on hand. In mid-May, the company said it planned to introduce “strategic investors” after failing to restructure the ownership of its Hong Kong-based insurance unit, widely seen as a prelude to an asset sale. No white knight appeared, and two months later it became the first large residential developer to default on a bond in five years.

Call me a cynic, but in the coronavirus age, it’s probably wise to tamp down any expectations of a bailout — especially if the potential acquirer is tied to Beijing. There are many reasons. First and foremost, too many state-affiliated businesses are already waiting in line. Peking University Founder Group Corp., which went into China’s equivalent of Chapter 11 proceedings earlier this year, is seeking strategic investors; so is perpetually loss-making local government financing vehicle Yunnan Metropolitan Construction Investment Group Co., as well as Tsinghua Unigroup Co., which controls a crown jewel of China’s chip-making ambitions.

Moreover, municipals have no money themselves. Their funding gap will reach as much as 11.5 trillion yuan this year, based on the Ministry of Finance’s own estimates. So when times are tough, China’s state businesses will save their siblings, not private enterprises. Meanwhile, even if there are genuine well-wishers, some distressed companies won’t be able to last long enough for acquirers to get the regulatory nod, given Beijing’s complex bureaucratic system.

So let’s be realistic. White knights live in fairy tales, not in China. Anyone betting on a rescue, more often than not, will be living off false hopes.

Shuli Ren is a Bloomberg Opinion columnist covering Asian markets. She previously wrote on markets for Barron’s, following a career as an investment banker, and is a CFA charterholder.