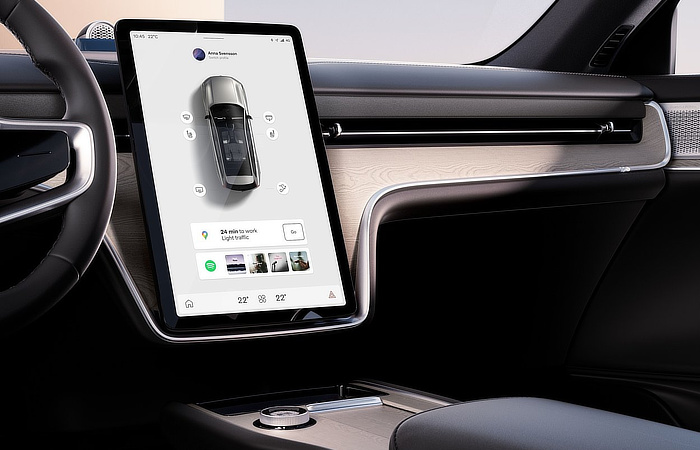 Have you ever been frustrated with the slowness of a car’s infotainment system? You have? You’re in good company because Volvo feels your pain. While modern-day infotainment systems have vastly improved, even the best still have software lag issues and glitches. That’s because legacy car manufacturers are much more focused on hardware, production, and sales. The exception is Tesla which considers itself a software/tech company first, the automotive tag is just a necessity, a result of being in the automotive industry. That philosophy has served Tesla well because their cars have set the benchmark for digital user interfaces.

Car manufacturers consider the infotainment system as an afterthought, but not any longer as Volvo is demonstrating with the EX90 SU-EV which will use smartphone technology and movie-grade CGI to provide the digital experience. From the vehicle’s infotainment and driver’s instrument panel to pretty much everything else a smartphone can do in a confined next-generation SU-EV.

Volvo has chosen the Unreal Engine from Epic Games to power the Human Machine Interface (HMI) of the new, fully electric Volvo EX90. Unreal Engine is widely used in the video games industry and the movie industry to power near-photo realistic renderings. It also powers the hugely popular Fortnite video game. Cloud connectivity will be able to deliver photorealistic, real-time 3D content and a growing range of new features.

At the launch of the EX90, Thomas Stovicek, Volvo Cars Head of User Experience explained:

“The Volvo EX90 is a significant step in technology for Volvo Cars, and not only because it is the first vehicle to be designed around our new all-electric platform,”

The 15-inch centre screen controls what Volvo Cars says will be one of the best infotainment systems on offer, with Google built-in providing access to services that include Google Maps navigation, the Google Play Store and Google Assistant for voice control.

With built-in LiDAR as standard and other advanced sensors, the Volvo EX90 provides very high levels of active safety and is the first Volvo that’s hardware-ready for unsupervised autonomous driving in the future.

Another example is terrain crossing: the Volvo EX90 will be available with All Wheel Drive. Real-time HMI can build on data from sensors, RADARs and cameras to bring additional information to the driver, allowing better decisions to be made with additional reassurance. The HMI’s high speed also allows real-time, lag-free layering of road information onto the head-up display, making functions such as vision support for poor conditions feel more natural.