Have you heard of honeynut squash? It’s an up-and-comer, and my prediction is that if you haven’t heard about it, you will – and honeynut squash recipes are going to be all over the place before we know it.

Honeynut squash is like a baby butternut – at barely two pounds each, you can hold them comfortably in the palm of your hand. Honeynut squash’s petite size makes it perfect for roasted squash for just one or two. And, after familiarizing myself with this this sweet and velvety squash, I knew I had to make a twice-baked version, because those half shells make for perfect individual portions.

This Twice-Baked Honeynut Squash is perfect for your Thanksgiving table (or anytime!) With sour cream and chives or scallions, it takes its cue from classic twice-baked potatoes. The tangy sour cream pairs perfectly with the ultra-creamy, mild and sweet squash. A bit of white pepper lends a hint of heat but without the black speckles. And the panko breadcrumb topping gives a satisfying buttery crunch to the whole situation.

Plus, the presentation is just cute!

Okay, so here’s where I go into annoying teaser mode. I’ve been working on a HUGE new project that I am super, duper excited about. I created this recipe awhile ago for that project, but darnit, I just can’t bring myself to wait for it to be ready before I share this recipe on Kitchen Treaty. Thanksgiving is this week, after all – and I needed to share it now. (No, it’s not a cookbook! But it is going to be awesome. A little weird. But a lot awesome.)

So back to Twice-Baked Honeynut Squash. Here’s what we’ve got:

How to Make Twice-Baked Honeynut Squash

First, you roast up your honeynut squash. Then, you scoop out the squash, leaving enough around the edge of your shell so that the cooked shell holds up. Mix the squash with your sour cream, chives, salt, and pepper – so simple! – then stuff your squash shells and top with your buttery panko. Bake some more until the breadcrumbs are golden, arrange on a platter with some pretty herbs, and dive in!

Honeynut squash is still a little hard to find. I’ve seen it at my local Sprouts Market and Whole Foods. My advice is, if you see it, grab it! You never know when you see it again and trust me when I say it is worth it.

Honeynut squash is still a little hard to find. I’ve seen it at my local Sprouts Market and Whole Foods. My advice is, if you see it, grab it! You never know when you see it again and trust me when I say it is worth it. 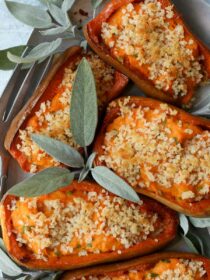 Petite honeynut squash – a smaller, sweeter, smoother knockoff of butternut – whipped smooth, served up in its own shell, and topped off with buttery panko breadcrumbs. Can’t beat the flavor OR the presentation!

Half and seed your honeynut squash

This post may contain affiliate links, which means if you click on a link and make a purchase, I may receive a portion of the proceeds. More about this here.
InCoffee Recipe, Coffee Shop, Fast Food Restaurant, Fat Free Food, Food & Drinks, Food Recipes, Healthy Food, Heavy Meal, Japanese Food, Trending Food These sweet and crunchy anise biscotti will transport you to Italy in just one bite! I love that you can make these cookies in advance (they freeze beautifully) to enjoy anytime, anywhere. When you think about biscotti, the crunchy, twice-baked Italian cookies destined for dunking, what flavor comes to mind first? Vanilla biscotti? Almond? Chocolate? […]

The BEST Homemade Buttermilk Biscuit Recipe ever! Our high-rise biscuits are easy to make and result in the most buttery...