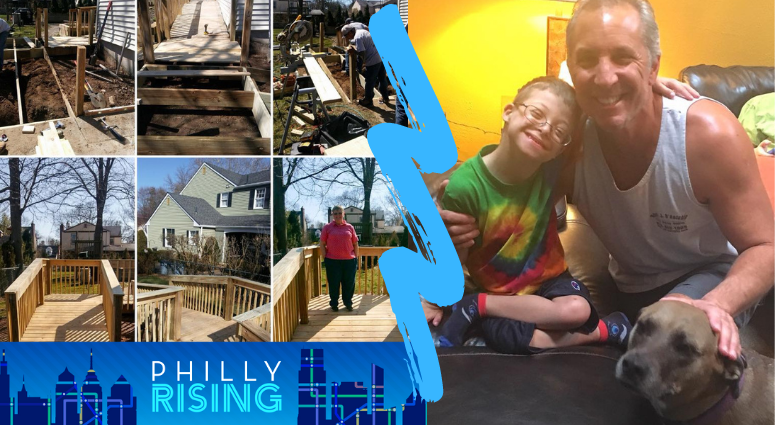 PHILADELPHIA (KYW Newsradio) — Over the past few decades, Scott J. D’Antonio has gone from a heavy metal headbanger to a home improvement hero.

“I believe that’s one of many that I have besides my children, is to help the special needs community. I feel it’s my job to help when I can,” he said.

He still has a knack for drumming, but he now spends more of his time and creativity renovating and remodeling homes in the South Jersey area.

Over the past five years, his company has changed the lives of dozens of families through their “day of service,” where they spend a day fixing up a home at no cost.

His team’s work and generosity inspired a TV show called Hometown Heroes, which D’Antonio describes as an authentic remodeling show where the audience can follow his journey of spreading positivity by helping families.

“A family of five shared one bathroom. It was a really heartfelt situation for the family, a really nice family. One of the organizations suggested that the family speak to us. We got the funding and it ended up being our TV show. More people are coming to us now,” he added.

The show also gave him an opportunity to relive his music dreams — he brought the band back together to produce the theme music for the show, except with less of the grunge than their 80s work.

“Music is in my blood, that’s really how I express myself,” D’Antonio said.

While the pandemic put the fun and the show on hold at only three episodes in, the work hasn’t stopped.

In recent months, they have also extended their charity to help healthcare workers as a way of saying thank you.

D’Antonio looks at the work as part of his purpose, crediting his mother for his giving heart.

“I love doing it. It’s very rewarding. I believe it’s one of the purposes I have in my life. I was taught this from the kindest, nicest, sweetest person, who is up top now: my mom. She taught me to be kind to everybody,” he said.

D’Antonio has funded many of their smaller projects out of pocket, and said he hopes that as the word continues to get out, that will allow them to help even more people.

“We do need funding because everything costs money, especially remodeling jobs,” he said.