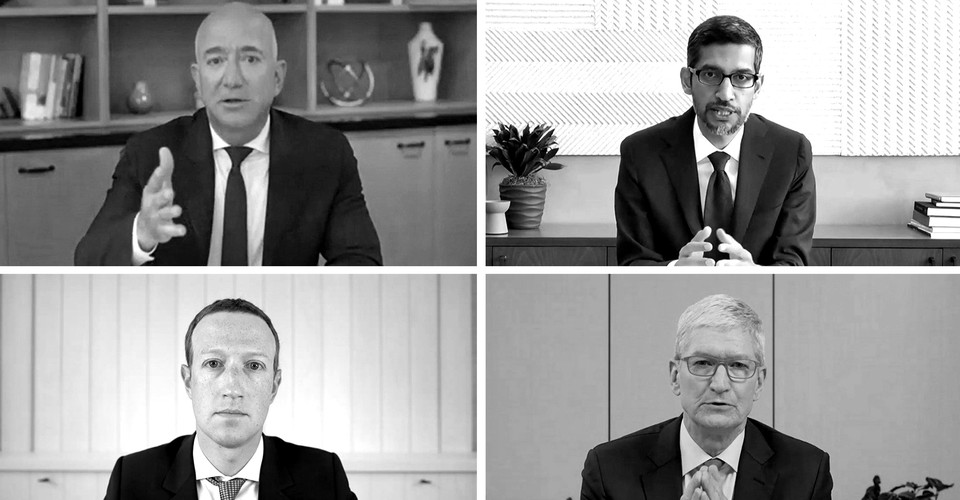 The congressional inquiry wasn’t focused on the pandemic, but rather on alleged abuses of monopoly power: Google’s dominance in the digital-ad market, Apple’s control of software in its App Store, Amazon’s treatment of third-party sellers, and Facebook’s aggressive pursuit of large competitors. The CEOs mostly danced around or denied these accusations.

Read: The tech giants are dangerous, and Congress knows it

Their influence cannot be denied. The technological underpinnings of ordinary life during the pandemic are impossible to avoid, in part because this crisis has made the tech industry only more ubiquitous. By the time the antitrust testimony finally started, I was able to relocate from the kitchen iPad to the office computer, but my younger daughter had begun her piano lesson outside the door (via Zoom, of course, on another iPad we bought from Tim Cook). I joined a last-minute video meeting at my university too, while watching the antitrust hearing, while comparing notes about it in Slack with my Atlantic colleagues. It feels quaint to call this “multitasking,” an outmoded walk-and-chew-gum euphemism for the desperate, computerized constancy of daily life. The pandemic is inescapable, but so is technology.

Antitrust law is supposed to ensure market competition, and the technology sector is a worthy target for its intervention—it pervades every crevice of ordinary life. All business is tech business. Banking is computers doing finance. Automobiles are computers spinning drivetrains. Retailers are warehouse pick-and-pack computers connected to freight-logistics routing computers. In his opening statement at the hearing, Representative Jim Sensenbrenner of Wisconsin emphasized the need to conduct oversight of Big Tech, but he also praised the tech companies whose CEOs he was addressing. In particular, Sensenbrenner cited grocery delivery among the “myriad of our daily needs” that the companies now provide. The coronavirus pandemic has finally made that market broadly appealing. But that doesn’t put grocery in the tech sector, even if Amazon owns Whole Foods. It just makes technology a ghost that haunts all business, including food shopping.

Read: The supermarket after the pandemic

Tech rules in smaller, less noticed ways too. In my video meeting, someone noted that the university assumes that professors teaching online will provide their own cameras, mics, and broadband. This everywhereness of technology pervaded the hearing. A tech CEO testifying from home is no different from what many professionals have been doing for months, but there’s something unnerving about seeing these titans of industry presented inside the technologies their industry commands. Seen on screens within the screen, the CEOs seemed impervious to lawmaker interrogation.

At one point, the antitrust subcommittee’s chair, Representative David Cicilline of Rhode Island, called a 10-minute recess to fix a technical issue with one of the participants. It might have been Bezos, who hadn’t said a word since his opening statement, a five-minute long paean to himself. Radio and television and print work, at scale, almost all of the time. But even despite its wealth and power, technology still fails remarkably often. Amazon Web Services provides almost half of the cloud computing that other technology companies build their businesses upon; outages, though rare, can effectively bring down the whole of the internet for most users.