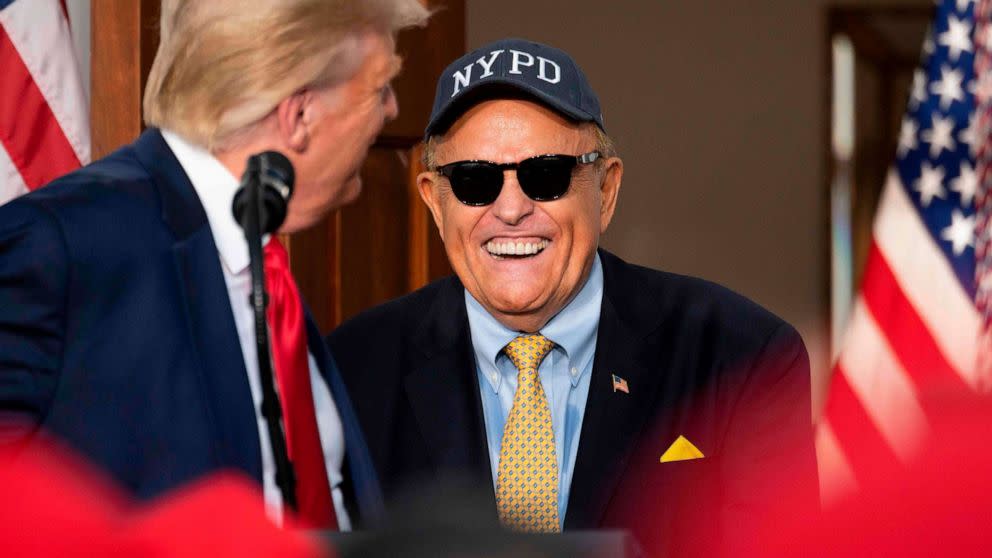 Nearly two decades have passed since Rudy Giuliani emerged following the Sept. 11 terrorist attacks with widespread national popularity and serious presidential ambitions. But today, “America’s mayor” stands instead at the brink of legal and reputational peril, embroiled in multiple political scandals and caught up in at least one federal criminal investigation.

This week, Giuliani offered feeble defenses to why he spent hours with a man now outed by the U.S. Treasury Department as a Russian intelligence agent in Ukraine. And he must now contend with extensive television footage of those meetings, where he pumped the agent, identified as Andrii Derkach, for damaging dirt about the Democratic rival of his main client, President Donald Trump.

Rep. Adam Schiff, D-Calif., the chairman of the House Intelligence Committee who led the impeachment effort against Trump, took aim at Giuliani without naming him in a statement following the Treasury Department’s announcement, warning him that he was spreading disinformation from Russia.

“This announcement should serve as a reminder to those in the United States that have elevated Derkach’s disinformation and engaged with him and other foreign actors spreading similar false narratives, that their work only advances Vladimir Putin’s interests and efforts,” Schiff said.

“There is nothing he gave me that seemed to come from Russia at all,” Giuliani added. “How the hell would I know?”

The meetings between the two occurred last winter, just as the House was preparing to bring impeachment articles against Trump. With a camera crew in tow, Giuliani met with and collected documents from Derkach, a former member of the political party of Ukraine’s former pro-Russian president, and expressed his intent on circulating the information he had collected from Derkach and other to the highest levels of the U.S. government.

Trump had expressed interest in the effort as well.

“He’s going to make a report, I think, to the attorney general and to Congress,” the president said during a gaggle with reporters at the time. “He says he has a lot of good information. I have not spoken to him about that information.”

The former mayor’s work in Ukraine this winter is the latest example of questionable activity he has engaged in since he began publicly identifying himself as Trump’s personal attorney. Experts have questioned whether this or other meetings Giuliani held during overseas travels should have triggered filings under the Foreign Agents Registration Act — a Cold War-era law that forces those lobbying on behalf of foreign interests to detail their efforts to the U.S. Department of Justice.

Joshua Rosenstein, a government ethics lawyer at Sandler Reiff Lamb Rosenstein and Birkenstock, told ABC News that FARA requirements “may well have been triggered” if Giuliani was acting in a certain capacity in his work with Derkach.

“If Giuliani was acting in any way at the specific request of, or under the direction/control/supervision of, the politicians with regard to any political activity in the U.S., then he would likely have to register,” Rosenstein said.

At the same time as those questions have surfaced, Giuliani is reportedly the target of an investigation by the U.S. attorney for the Southern District of New York — a job Giuliani once held.

The office is believed to be investigating Giuliani and his connection to two Soviet-born businessmen Lev Parnas and Igor Fruman, both of whom were indicted last year in an alleged campaign finance fraud scheme. Parnas and Fruman have both pleaded not guilty; their trial date is set for February. Giuliani has denied any wrongdoing in his dealings with the two men.

Parnas and Fruman became key figures during the congressional impeachment inquiry in connection with their reported role in assisting Giuliani in his effort to dig up dirt on former Vice President Joe Biden and his family, as well as calling for the dismissal of then-U.S. ambassador to Ukraine Marie Yovanovitch. The duo had allegedly helped arrange meetings between Giuliani and former and current Ukrainian officials.

Giuliani has since acknowledged receiving $500,000 in payments for work he did for a company owned by Parnas and Fruman, telling ABC News at the time that he was retained by Parnas’ business, named Fraud Guarantee, to do consulting work and insisted that any money he took came from domestic, not foreign sources.