Rays, Brent Honeywell plotting a path back to mound 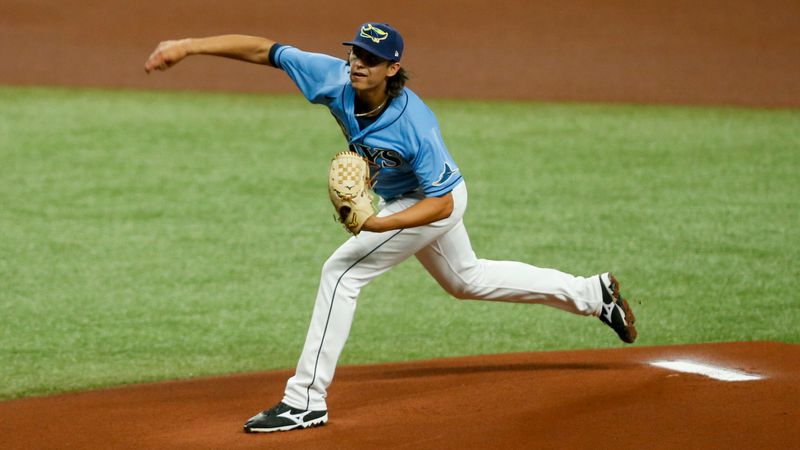 Brent Honeywell had to a lot to deal with Tuesday in making his second big-league appearance, which didn’t go nearly as well as his dazzling April 11 debut.

A predawn departure from Port Charlotte and travel logistics in getting to Kansas City, Mo. Temperatures in the 30s. And, most of all, being used out of the bullpen.

“I didn’t really know how to approach it, honestly,’’ Honeywell said. “Just got myself as ready as I could. You’ve still got to put the ball in your hand and throw the ball. To me, there’s not really that big of a difference. I was ready to go out there. I just didn’t execute. It was definitely not a good day for me.’’

Results-wise, no, as he retired only four of eight batters, allowing two hits (including a Carlos Santana home run) and two walks.

But having missed the previous three seasons due to multiple elbow injuries, just pitching in the majors is a good thing.

The next step for Honeywell and the Rays is to figure out how best to use him, knowing the right-hander is limited for now to 2-3 innings and has been working on a five-day schedule. To help out the bullpen, he will have to pitch more frequently, which manager Kevin Cash said they think he can handle, though of course they will be cautious.

“Our thought is that depending on if we keep him to shorter workloads, then the theory is he bounces back quicker,’’ Cash said before Wednesday’s game. “But we’re still going to learn a lot about his bounce-back as we go. It’s very fair to assume he’s not going to be pitching (Wednesday). Most guys that come in and throw 1⅓ innings with multiple days (off previously) bounce right back, but that’s not the position that we’re in with Brent, for good reasons.

“We want to make sure that we’re prioritizing his bounce-back and his health. So we’ll give him a couple days and then we’ll go from there, see how he feels.’’

One scenario, which could allow Honeywell to stick with his more familiar starter routine, would be to use him somewhat regularly as an opener, maybe as soon as Saturday, ahead of Ryan Yarbrough.

Honeywell, understandably, is just happy to be with the team and willing to do whatever is asked, planning to spend Wednesday talking with bullpen coach Stan Boroski and veteran relievers for tips on getting loose and being ready.

“I’m fine with it,’’ he said. “Anything I can do to contribute to help win. It’s a need right now. So I’ve got no problem with it. I’m pitching. I’m healthy. I feel good. I’m recovering really good still. Definitely getting my feet wet out of the ’pen a little bit was a plus.’’

Is there a K in Arozarena?

Outfielder Randy Arozarena had three hits Tuesday but also three strikeouts, giving him eight Ks in his last three games and 24 total in 73 plate appearances (33 percent) through Tuesday. He was not in the lineup Wednesday, having also been off Sunday.

Cash said he wanted to use as many lefty hitters as they could Wednesday against Royals righty Jakob Junis, and noted they are slated to face lefty starters in five of their next six games so there would be plenty of playing time coming. (Arozarena did deliver a pinch-hit double in the eighth.)

However, Cash said, “there is some swing-and-miss there that we didn’t see as much in the past. But trust that he’ll be able to continue to make his adjustments and get his timing right where he’s covering both the offspeed (pitches) and the fastball.’’

• Lefty Cody Reed flew back to Florida to receive a Botox injection in his numb/weak left hand, but an issue with delivery of the medicine delayed the shot until Thursday.

• Tyler Glasnow, who is set to start Friday against Toronto to open a season-high-matching 10-game homestand, said he has had no further issue with the severe cramping in his left hand and right leg that affected him dramatically Saturday.

• Thursday’s day off, after an early morning arrival from Kansas City, will be appreciated as the Rays just played 13 straight days, and starting Friday play 17 in a row, including a trip to the West Coast.

• The five walks the Rays got in the second inning Tuesday were their most in a frame since six in a 2012 game.

Sign up for the Rays Report weekly newsletter to get fresh perspectives on the Tampa Bay Rays and the rest of the majors from sports columnist John Romano.

Never miss out on the latest with the Bucs, Rays, Lightning, Florida college sports and more. Follow our Tampa Bay Times sports team on Twitter and Facebook.

The Transformation of a Soccer Club, and the Ways We Value Women’s Sports

Why does lumber to build new homes in Utah cost $35K more than a year ago? Blame the coronavirus.