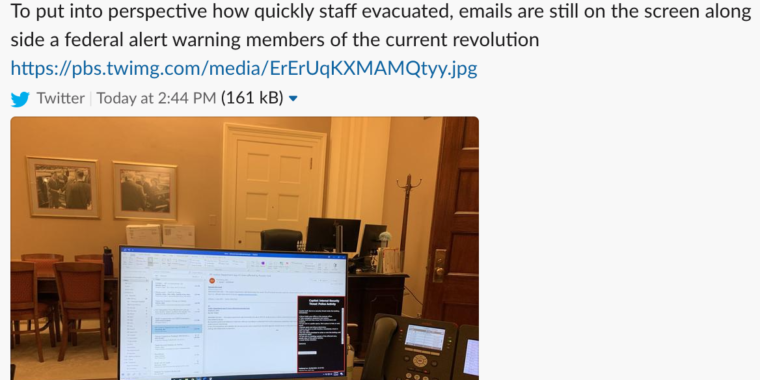 Members of Congress fleeing a pro-Trump mob left their offices so quickly that at least one staffer left their computer on and logged into their official email, according to a screenshot posted by a conservative reporter. Elijah Schaffer, a reporter for the Glenn Beck publication The Blaze, wrote that he was “inside Nancy Pelosi’s office” with what he called “revolutionaries” who have “stormed the building.”

“To put into perspective how quickly staff evacuated, emails are still on the screen along side a federal alert warning members of the current revolution,” Schaffer wrote.

Both houses of Congress assembled at the Capitol this morning to ratify the election of Joe Biden to be the next president of the United States. But President Donald Trump, who has refused to recognize his defeat, organized a rally outside to protest the results.

Speaking to thousands of protestors outside the Capitol, Trump warned that if Vice President Michael Pence accepted the election results—as the law and the Constitution require him to do—America would be “stuck with a president,” Biden, “who lost the election by a lot, and we have to live with that for four more years.” Trump vowed that “we’re just not going to let that happen.”

Some of the protestors soon tried to make good on Trump’s threat. They stormed the capitol building and forced their way past Capitol Hill police. As angry rioters began roaming through the hallways, police escorted Vice President Pence, House Speaker Nancy Pelosi, and other members of Congress out of the Capitol building.

With the capitol building still occupied by a violent mob, it’s not clear how much access rioters have gained to sensitive information. With luck, staffers who had access to classified data managed to log off before evacuating their offices. But with thousands of people working on Capitol Hill, it seems likely that some serious data breaches will occur.

Your Computer is on Fire review: Wake up to tech’s inequalities