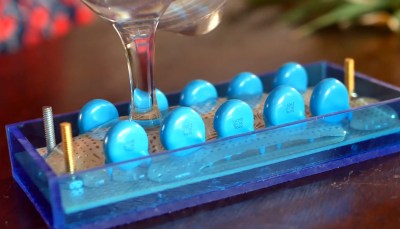 We’ve seen our fair share of Farnsworth–Hirsch fusors over the years — these high-voltage devices can get ions cooking to the point of achieving nuclear fusion even on a hobbyist’s budget, and even though they won’t solve the world’s energy problems, they certainly make for an impressive light show. While “simple” to build in the relative sense, the examples we’ve seen in the past have still been bulky contraptions supported by a cart full of complex gear befitting a nuclear reactor.

Which is why the fusor [Jay Bowles] recently completed is so impressive. As you can see in the latest Plasma Channel video which we’ve placed below the break, this desktop “star in a jar” not only features an incredibly low part count, but looks more like a movie prop than anything you’d expect to find in a physics lab. If you ever considered building a fusor of your own but were put off by the size and complexity of existing designs, you’ll definitely want to check this out.

The decidedly non-fusor look of this creation can be attributed, at least in part, to [Jay]’s well-known love of building things out of multi-colored acrylic sheets. But you’ve also got to give credit to the transparent walls of the vacuum chamber, which offer breathtaking views of the plasma field surrounding the electrode. In a traditional fusor you’d usually expect a tiny view-port popped in the side of beefy metal tank, but in this case its almost the other way around.

Now to be clear, the build wasn’t without its issues. Building the 40 kilovolt epoxy-potted voltage multiplier was no problem for [Jay] given the sort of projects he’s used to, but this was the first time he’d tried to work with a vacuum. As you might expect, that meant some trial-and-error surrounding everything from how to seal the connections to the strength of the pump used to pull down the chamber. Still, after a few false starts, he was treated with the mesmerizing glow of confined plasma.

[Jay] says the next step is to introduce some deuterium into the chamber, so stay tuned for an update. Much like the multi-stage ion thruster he put together last month, we expect to be a project that’s going to be popping on Plasma Channel regularly as improvements are made. There’s also a good chance we’ll be hearing more about these builds when [Jay] takes the stage at the 2022 Hackaday Supercon.

Previous post Bill 96 Comes into Law: What Employers with Québec-based Employees Need to Know About the Enhanced French Language Requirements