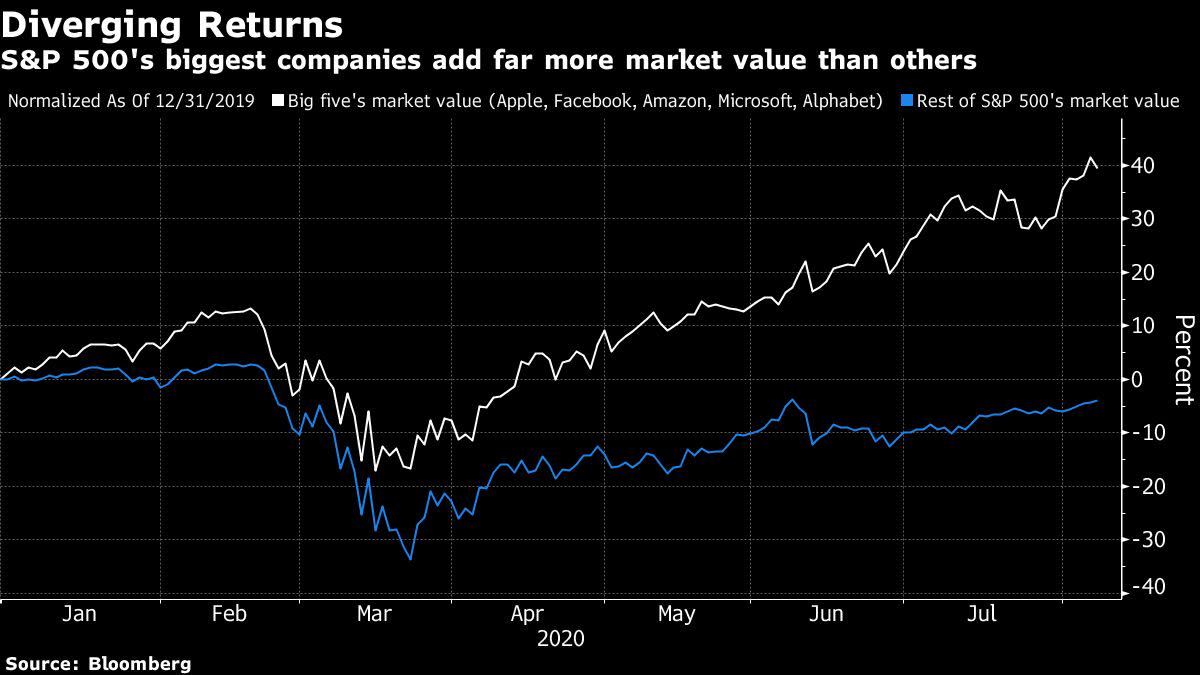 (Bloomberg) — In trying to explain the most baffling fact of 2020’s topsy-turvy markets, how tech valuations have swollen to bubble-era extremes even as a pandemic rages, people cite two things. Federal Reserve largesse, and hopes the coronavirus will be quickly contained.

But another, slightly scarier theory exists as to how the value of companies in the Nasdaq 100 has expanded by $2.9 trillion in this of all years. It’s that the Covid-19 crisis’s impact, or at least the social-distancing strictures it has forced upon the world, will prove to be permanent.

While not quite accepted wisdom, it’s a view coalescing in the minds of certain market watchers — that even if the virus is defeated, the behaviors it has engendered will live on. The idea gets tossed around after weeks like this, in which the tech gauge jumped more than 2{09c3c849cf64d23af04bfef51e68a1f749678453f0f72e4bb3c75fcb14e04d49} and its price-earnings ratio topped 36 for the first time since 2004.

“Even when things normalize post vaccine, do we go back to the old way of doing business, or have we just sort of fast forwarded?” said Rich Weiss, chief investment officer of multi-asset strategies at American Century Investments. “The digital transformation initiatives have just rocketed us into the future, and that’s going to be the way of the future. So those companies’ valuations may be very justified.”

One way of quantifying how much investors expect of giant technology companies such as Apple Inc. and Amazon.com Inc. is to consider how much it will take for their profits to “grow into” existing valuations. For instance, the Nasdaq 100’s price-earnings ratio of 36 compares with a 10-year average of 22. Assuming tech shares sit still, they’d need three years’ worth of almost 20{09c3c849cf64d23af04bfef51e68a1f749678453f0f72e4bb3c75fcb14e04d49} annual earnings growth to get multiples back to average.

Going by this logic, the market, consciously or otherwise, is doing more than just adjusting for a brutal but brief economic interruption. Rather, it’s repricing itself for a more profoundly altered reality — a world in which the urge to limit human interaction squeezes the old economy mercilessly while hastening the ascent of a digital and mostly automated economy.

“We’re going through a really troubled time right now. It has changed the way we live,” said Kim Forrest, chief investment officer of Bokeh Capital Partners. “We’re learning how to do business in this touchless world, and technology is at the core enabling it.”

Signs of lasting change are everywhere. Bankruptcies are piling up, altering the consumer landscape. A survey by CreditCards.com found more than 40{09c3c849cf64d23af04bfef51e68a1f749678453f0f72e4bb3c75fcb14e04d49} of people who spent money on movies and event tickets before the pandemic now plan to spend less. Half of Americans aren’t eager to hit a bar, and more than one-third aren’t excited about sports games or movies, according to a recent survey by Bloomberg and Morning Consult.

“Those thrust into remote work settle into new routines — the question is, if they have a choice as the environment gets safer, will they switch back to the old way? Most likely, some of the new habits will stick, including because they may work better in some settings,” Admati said. “The benefits of digital technology that allow remote work are seen evermore clearly and so is the staying power of such technology.”

“As long as the virus is hovering over us and as long as there is a belief that the virus could move into a second wave, you’re going to be in pockets of the market that have people staying at home more and where there is growth and that’s it — those tech names including the stay-at-home tech names,” said Quincy Krosby, chief market strategist at Prudential Financial. “That’s what keeps people working.”

In Morgan Stanley’s latest survey of chief information officers published last month, planned tech spending is forecast to post a record drop of 4.4{09c3c849cf64d23af04bfef51e68a1f749678453f0f72e4bb3c75fcb14e04d49} this year. That means, according to Mike Wilson, the firm’s chief U.S. equity strategist, much of the benefit that the industry enjoyed during the pandemic lockdown was likely a pull-forward of demand, rather than a sustained acceleration — a backdrop that may prompt downward earnings revisions in the second half.

“The majority of the value of these companies is much further out than a normal stock,” according to Stucky. “If the working-from-home environment persists, there’s probably not a good reason why things would change.”