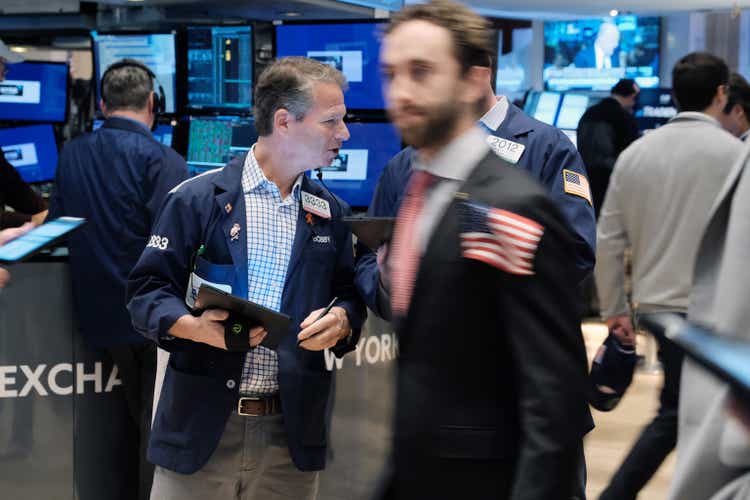 A mid-day push had helped U.S. stocks climb well off their session lows on Thursday. Some gains in megacap technology firms and heath care stocks had helped the Nasdaq and S&P pare most of their losses, while a jump in shares of Cisco boosted the Dow.

All three major indices had opened lower, while Treasury yields rose and the dollar advanced, as further hawkish comments from Fed speakers along with stronger economic data weighed on sentiment.

St. Louis Fed president James Bullard at an event said that more rate hikes are needed to reach a level that would be considered “sufficiently restrictive”, which tempered hopes of the central bank slowing down its aggressive pace of rate hikes.

Aside from Bullard, it was a busy day in terms of Fed speakers. Atlanta Fed President Raphael Bostic spoke before the opening bell. Governor Michelle Bowman spoke, along with Cleveland Fed President Loretta Mester who gave opening remarks at a financial stability conference. Minneapolis Fed President Neel Kashkari moderated a morning panel, and is slated to speak again at an afternoon keynote for the Minnesota Chamber of Commerce.

In economic data, October housing starts came in above expectations at an annual rate of 1.425M compared to the estimated 1.41M figure. Additionally, building permits came in at 1.526M versus a consensus of 1.516M. The data pointed to a stubbornly strong housing market even in the face of higher interest rates.

“October’s fall in starts means they have plunged 21% from their recent peak in April. Demand for homes has collapsed in the wake of the surge in borrowing costs, and most homebuilders are now sat on substantial excess inventory… Mortgage rates have now peaked, however, so demand is unlikely to fall much further, though it will remain at an extremely depressed level for some time yet,” Pantheon Macro said in a note.

Furthermore, the number of Americans filing for weekly jobless claims fell by 4K to 222K, in-line with the estimate, suggesting continued resilience in the labor market.

The Philly Fed index came in at -19.4 for November, which marked the fifth negative reading out of the past six months.

However, the 2s10s yield curve closed below -60bps on Wednesday for the first time since 1982, meaning that the yield on the 2 year U.S. Treasury bond was 0.6 percentage points higher than the yield on the 10 year Treasury bond. This extent of yield curve inversion (longer dated bonds normally have higher yields than shorter dated bonds) “is concerning when you consider its historic accuracy as a leading indicator of recessions,” Deutsche Bank’s Jim Reid said.