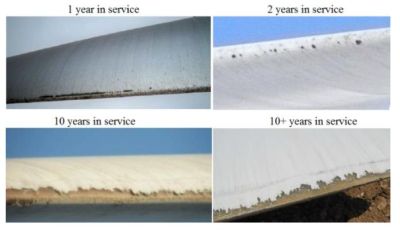 Erosion is all around us, from the meandering course of rivers and other waterways, to the gradual carving out of channels in even the toughest mountains, and the softening of features in statues. Yet generally we expect erosion from precipitation to be gradual and gentle, taking decades to make a noticeable difference. This of course takes into account gentle flows and the soft pitter-patter of rain on stone, not turbine blades passing through the air at many times the terminal velocity of rain drops of up to 9 m/s.

As wind turbines have increased in size and diameter of their blades, this has noticeably increased the speed of especially the blade tips. With more and more wind turbine blade tips now exceeding speeds of 100 m/s, this has also meant a significant increase in the impact of rain drops, hail and other particulates on the lifespan of these turbine blades. As comparison, 100 m/s is 360 km/h (224 mph), which is only slightly slower than the top speed of a Formula 1 car.

The effect of turbine blade leading edge erosion (LEE) not only decreases aerodynamic efficiency, but also invites premature failure. Over the past years, special coatings and leading edge tapes have been developed that act as sacrificial surfaces, but as wind turbines only keep getting larger, so does the effect of LEE. Beyond simply replacing LE tape every year on every turbine, what other options are there?

Although LEE is not a unique problem with wind turbine blades, they are in a rather unique position in that unlike propeller blades and turbine blades in industrial equipment or jet engines, they are exposed constantly to the elements. In addition, their sheer size is beyond that of these other blades, which complicates inspection and maintenance.

In a review by Keegan et al. (2013, PDF), a number of causes of LEE are identified. These can be broadly grouped into the following categories:

Which of these a specific wind turbine is exposed to depends on the location where it is installed. For some off-shore wind turbines all four of these may be a factor, while for other only sand or rain may be relevant. Regardless, the result remains largely the same. With the impact of a rain drop or solid particulate, the leading edge of the blade will experience a transfer of kinetic energy that over time will weaken and erode its structure. In the case of a rain shower and a modern wind turbine, this involves constant strikes by 0.5 mm – 5 mm diameter droplets at around 100 m/s.

In a study by Verma et al. (2020) in Composite Structures, the force distribution of rain droplets for offshore wind turbine blades was examined. Using a range of modeling techniques, it was found that by reducing the blade tip speed from over 100 m/s to around 80 m/s, much of the impact damage can be avoided during heavy precipitation. As comparison, with a blade tip velocity of 140 m/s, the maximum impact force was found to be 181 Newton, whereas at 80 m/s this was reduced to below 70 N, making for an approximately 70% reduction.

As wind turbines keep growing in hub height and corresponding turbine blade length, such extreme blade tip velocities may become increasingly common, especially for offshore wind turbines which tend to be significantly larger than their onshore brethren. Reducing the blade velocity during heavy precipitation or storms with severe sea spray by partially feathering the blades, or employing the brake system, at least part of the LEE damage may be avoidable.

In concrete terms, the effect of LEE is such that it can reduce the output of a wind turbine by a few percent after as little as a year, with even mild pitting affecting the efficiency of the turbine blades by disrupting the airflow over its surface. The general model for LEE as it pertains to turbine blades and propellers was created by G.S. Springer in 1976 in Erosion by Liquid Impact. This model uses the waterhammer principle, and is critically examined with improvements suggested by Hoksbergen et al. (2022) in Materials.

In a study by Law et al. (2020) the data from wind farms across the United Kingdom was analyzed. It was found that an average loss of output by each wind turbine per year of about 1.8% was to be expected, with the worst affected wind turbine experiencing losses of 4.9%.

Most interestingly about the study by Law et al. was the finding that the application of leading edge repair tape (leading edge protection, or LEP) to repair LEE damage to a turbine’s 3-year old blades resulted in an additional 1.29% drop in output. This shows just how important the shape of the turbine blades is in order to get the best possible performance, and exemplifies the issue with field repairs using LEP tape.

Although there’s an argument to be made that leaving the LEE to continue unchecked would lead to even worse performance over time, there should not be the expectation that applying tape to the leading edge of a damaged turbine blade will return it to its former glory. Major et al. (2020) also report a 2%-3% drop in Annual Energy Production (AEP) from the use of LEP tape.

A 2019 article in Renewable and Sustainable Energy Reviews by Herring et al. further expands on the complexity of turbine blade field maintenance. Unless such tape is properly applied, it may peel off, have wrinkles or air pockets. This article also addresses the option of applying a metal anti-erosion shield to the leading edge. This would provide good protection against erosion, but adds the complication of a hybrid composite and metal blade structure with different stiffness.

Finally, there is ongoing research (McGugan et al., 2020) on adding sensors to wind turbine blades in order to monitor vibrations and other parameters that can indicate damage to the blade, including LEE damage.

In the end, reducing LEE is a double win in terms of less blade maintenance required and higher efficiency, but the solution is by no means simple. Even small changes such as the thickness of LEP tape can matter when they’re scaled up to the size of a giant wind turbine blade, with significant financial implications from lower efficiency. As blade tip speed increases with ever larger wind turbine blades, so does the importance of developing better ways to protect the blade’s surface.