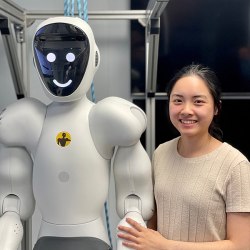 Science fiction is full of things you don’t want to think too hard about. Why do starships with transporters have brigs with forcefields? Why not just beam a prisoner into an enclosed space?  Why do Cylons fly ships with human controls? Why not have a plug in their… well, you get the idea. For that matter, why do Cylons (and Kaylons, and Gort) even look human at all? Why aren’t some Cylons just ships?

Of course, the real reason is so we can identify with them and actors can play them with some cosplay gear and makeup. But real-life robots that are practical rarely look like humans at all.

No one is going to confuse a robot factory arm or a Roomba with a person, yet they are perfectly suited for their purpose. Yet we are fascinated with human-looking robots and continue to build them, like Nadia from IHMC Robotics in the video below.

It is something of hubris to think that the human form is ideal for everything. Look at nature. While some animals look like us, others are totally different because they fit different ecological niches. If you are going to make a smart machine, why not make it fly, jump, swim, or even stay in one place, if that’s what it needs to do? Robotic fast food fry chefs, for example, tend to ride on a ceiling-mounted rail, and why shouldn’t they? As much as we like to envision androids, an army of metallic workers asking us if we want fries with that would probably be a little unnerving.

There have been calls lately to not arm robots. We had to chuckle at that because robots are already armed. What is a cruise missile or an autonomous drone with a weapon but an armed robot? Self-driving cars are weapons all by themselves. A bullet isn’t any more dangerous than getting hit by a 3,000 kg vehicle. Yet it seems that robots that look like people carrying weapons make people more uneasy than non-anthropomorphic autonomous weapons.

One use case might be in the field of human interaction. Perhaps you really do want your robot nurse or translator (C3PO) to look sort of human. A robot made to fill in for a person sometimes might need to appear somewhat human, but generally speaking, that’s not an efficient approach. (Did Star Wars get it exactly right?) What use cases can you think of for human-looking robots that aren’t pretending to be people?

Let’s face it. Robots like Sophia, ASIMO, or RoboNaut/FEDOR make good news stories. Flippy ROAR might not be as sexy, but it is a lot more practical and you are more likely to encounter one in real life.

Not that humanoid robots don’t seem cool. Want to build one? There’s an open-source one out there, at least half of one, anyway. If you want the whole thing, check out Poppy.

Previous post Can I Sue for an Aerial Lift Accident? | Patrick Daniel Law

Next post What Is Loan Stacking? – Headway Capital Blog

Digital media provides us with a lot of advantages. For something like recording and playing back music, digital copies don’t degrade, they can have arbitrarily high quality, and they can be played in a number of different ways including through digital streaming services. That being said, a number of people don’t feel like the digital […]