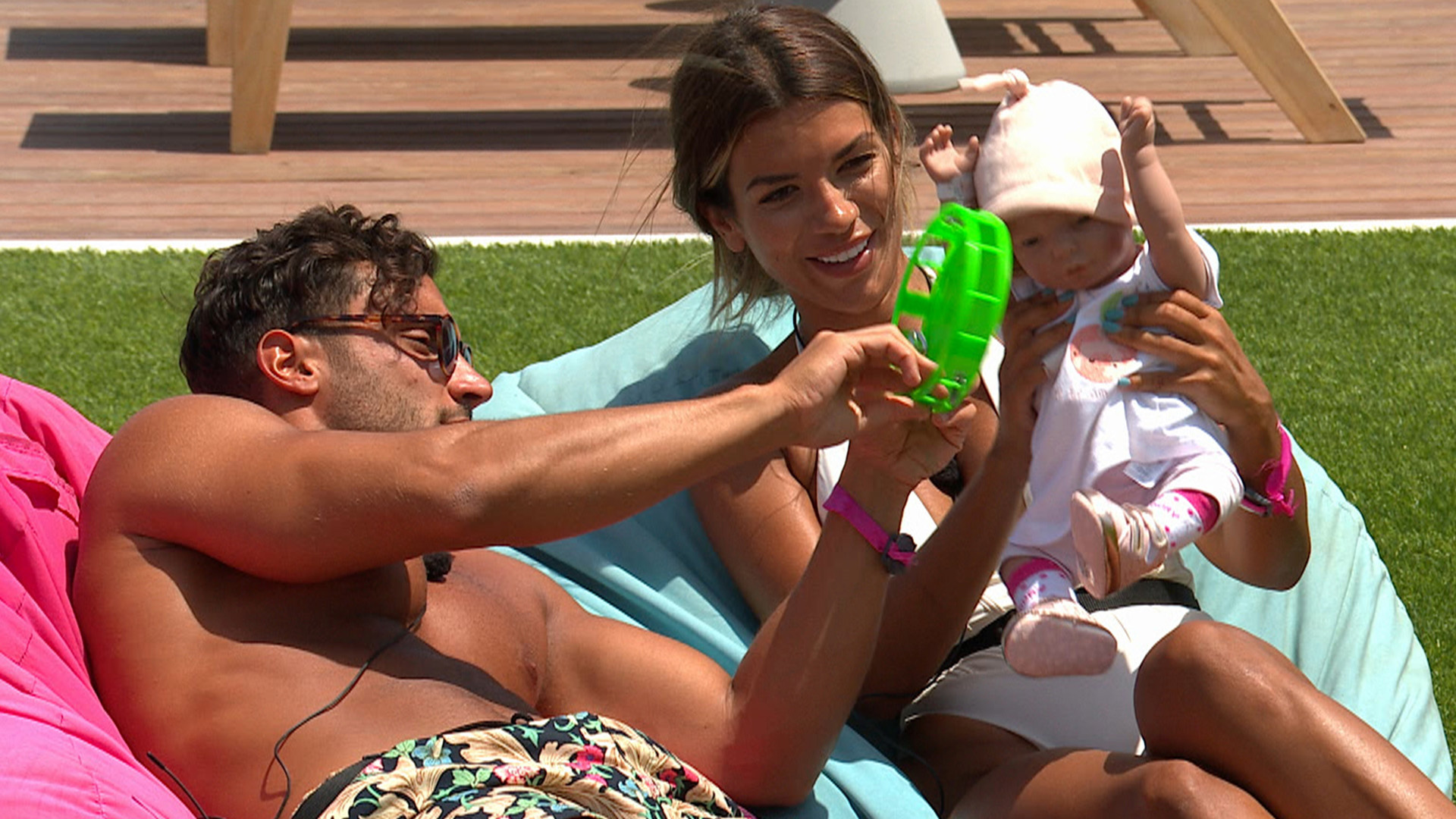 BROODY Love Islanders were treated to their first taste of parenthood last night as the annual baby challenge made its noisy return to the villa.

But while some couples embraced their roles as mum and dad, others seemingly couldn’t wait to hand their squawking dolls back.

So, what did their baby behaviour reveal about the remaining five couples as we fast approach the final?

In fairness, Andrew was not a bad dad, but as for Tasha, the jury is still out, after she blurted that she didn’t think her “equipment” could handle four babies.

What the challenge revealed about Andrew is that he is patient and compassionate, and will always be willing to wait for Tasha to catch up with him.

This bodes well for them as a couple and as parents.

Tasha will be able to lean on Andrew for support in the difficult times, as we’ve seen she can be a bit wishy-washy at times.

The couple seemed to communicate well during the task, but I don’t think they will be having a baby anytime soon – at least not on purpose!

It was a game of two halves – Gemma declared her baby “ugly” and on return from her boozy lunch demanded of baby Rog, “Why are you pushing my buttons?”

Despite her initial outbursts, Gemma promised to “keep popping them out” – and Luca was obviously willing to help her do so, which bodes well for their relationship.

Luca surprised us all with his dad skills.

He is protective and will be towards their children, and there is a macho side to him that will make him a good provider for their family unit.

Gemma was not that confident with the baby but at 19 she is still quite young.

She’s the type that will pull her weight and do what is required of her as a mother when her maternal instincts kick in.

For someone who initially didn’t want kids, 6ft 5in muscle man Adam revealed a softer side, and managed baby Sage very well while Paige and the girls enjoyed a boozy lunch.

Although we didn’t see much of paramedic Paige in her mum role, she has an easy relationship with Adam, and he did enough for mum and dad combined.

Adam surprisingly has all the trappings of a good dad, and his hands-on approach coupled with Paige’s caring nature will ensure that they are good parents.

Plus, Paige will be very confident when it comes to any medical issues to do with their children!

The oldest couple in the villa showed their maturity in this challenge, settling into the task and having fun while doing it.

For all their dramas over the past few weeks, on the evidence of last night, they communicated well and are ready to be parents now if Ekin-Su has anything to do with it.

Davide seemed to have the most fun with their baby and will spoil his children rotten.

Ekin-Su, who already sees herself as the mother of the villa, will be the parent responsible for disciplining their kids.

They are both comfortable with children and will make great parents.

Well-deserved winners of the challenge, Damiya came into their own last night, and managed baby Sienna like a couple of seasoned pros.

The girls agreed that Dami really shone as a dad, showering their baby with love, care and patience, taking the pressure off Indiyah.

She was so impressed she declared she wanted four babies, so Dami is going to have his hands full!

Dami was the stand-out surprise in this task as he seemed to be completely in his comfort zone with the baby with Indiyah almost on the periphery.

This shows he will be solid, dependable and involved as a dad.

Indiyah was quite hands-off, but involved when needed.

Her relaxed approach will balance out Dami’s, making them likely to be successful parents.

You know the rules for dating, right? Group dates only, no one-on-one in high school. Don’t even think about dating until you’re 16. Or 18. Or 21. Don’t date until you’re ready to mate. The purpose of dating is to find a future spouse. Have you heard those before? Chances are you’ve spoken those very […]

Parenting is a daunting task for any individual. How do you know if your parenting style is authoritative or authoritarian?...

If you like a flutter and you want something to do when the kids are in bed, you may want...

7 Ways to Help Your Family Transition to a New Home Families all react to needing to sell your home...