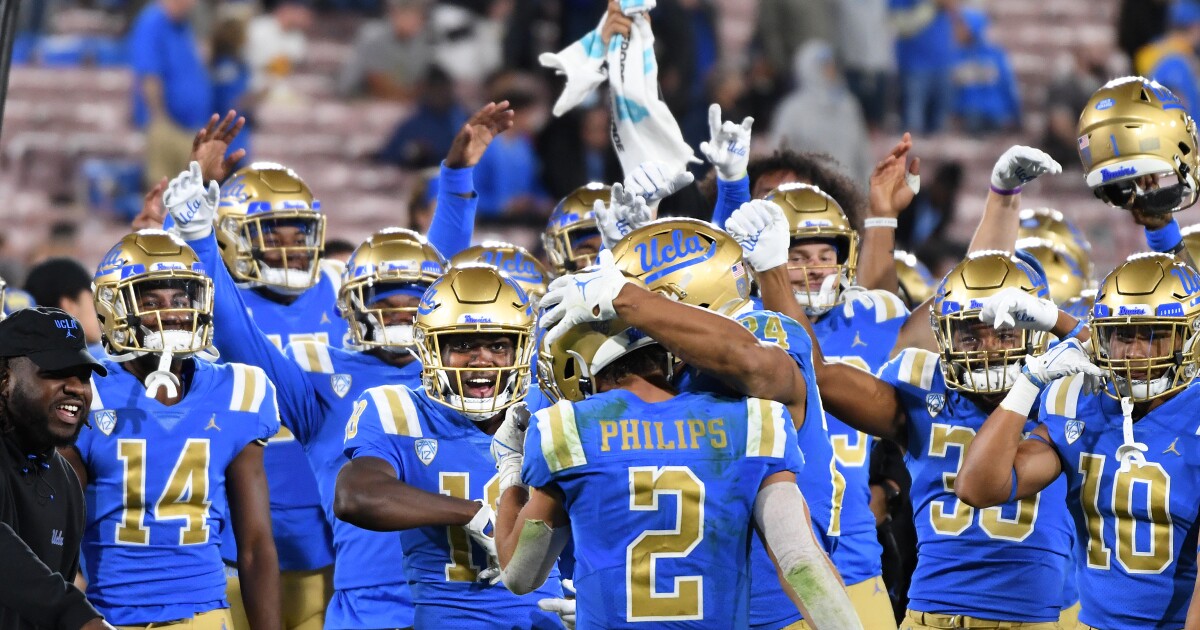 UCLA will have a significant say in where it ends up after clinching bowl eligibility for the first time since 2017 with a 44-20 romp over Colorado on Saturday night at the Rose Bowl.

“It’s a real special moment, especially for the seniors, right?” Bruins safety Quentin Lake said after the game. “We’ve been through trials and tribulations for the last four years, so it’s fun to kind of really relish in all the work that you put in.”

The only place the Bruins (6-4 overall, 4-3 Pac-12) won’t be going is back to their home stadium for the Rose Bowl game. Utah ended that possibility by eliminating UCLA from Pac-12 South contention earlier Saturday with a victory over Arizona.

Like conference officials, the Bruins will be rooting for Oregon to make the College Football Playoff because that would ensure the team that loses to the Ducks in the Pac-12 championship game goes to the Rose Bowl on Jan. 1. Every other bowl-eligible team would get a one-spot bump in the pecking order as a result.

Bowl prognosticator Jerry Palm projects Oregon to miss the CFP because he’s factoring another loss for the Ducks into his calculations. In that scenario, Oregon would play in the Rose Bowl and Utah would drop to the Alamo Bowl, which gets the next-best pick from the Pac-12.

Palm predicts that UCLA will take that more highly coveted spot, playing No. 13 Wake Forest (9-1) in the Holiday Bowl on Dec. 28 at Petco Park in San Diego as part of a matchup that would surely excite Bruins fans given the Demon Deacons’ success.

“We still have stuff to play for,” UCLA quarterback Dorian Thompson-Robinson said Saturday night. “And obviously [qualifying for] the bowl game was one of them. So now that we have that, we can check that off the list. But the work’s not done. We still got to play the last two games.”

Starting with the Sun Bowl, which gets the No. 4 team from the Pac-12, the selections are based solely on conference record. The Sun Bowl’s Pac-12 participant will face an Atlantic Coast Conference opponent on New Year’s Eve in El Paso. The inaugural Jimmy Kimmel LA Bowl goes next, matching the No. 5 team from the Pac-12 against a Mountain West Conference opponent on Dec. 18 at SoFi Stadium.

There’s one final spot for a Pac-12 team in one of the ESPN bowls — Gasparilla, First Responders and Armed Forces — that will be filled by a pool of at least five conferences.

UCLA sits alone in third place in the Pac-12 South, one game behind Arizona State and two games behind Utah. The Bruins have the easiest remaining schedule, with games against USC (4-5, 3-4) next weekend at the Coliseum and COVID-19-ravaged California (3-6, 2-4) on Nov. 27 at the Rose Bowl.

In the Pac-12 North, Oregon State and Washington State are tied for second place, two games behind Oregon.

“I think it’s just a part of just working toward rebuilding the program,” Thompson-Robinson said of UCLA’s first postseason appearance in four years. “You know you want to get to a foundation, something that you can build up on as a program as a whole and I think a bowl game is definitely that.”