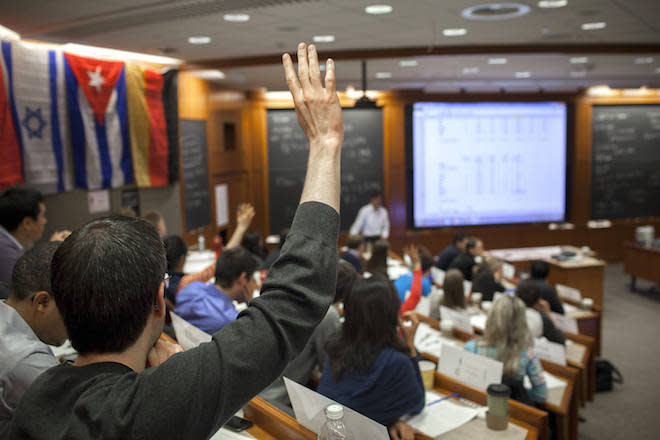 After years of criticism that Harvard Business School largely ignored Black business leaders in its case studies, the school boasting that its professors have in the past year completed more than 70 cases with Black or African American protagonists.

In a self-congratulatory article generated by the school’s public relations staff, HBS noted that another 50 other cases with Black protagonists are still in process. The faculty also completed more than 90 cases, with 20 still in process, featuring protagonists who are LatinX/Hispanic, Asian or Asian American/Pacific Islander, or Native American or other Indigenous people. Without citing numbers, the school says that in 2020-2021 the number of cases taught in the first year RC with Black or African American protagonists increased by nearly 60%.

In a given year, HBS faculty produce on average of roughly 400 cases. The article points out that “160 completed cases represent a significant percentage of the overall number. In addition, new faculty casework focuses on race, inequality, and diversity and inclusion in America and beyond.” The new cases cover a vast range of topics from “The Tulsa Massacre and the Call for Reparations” to “Board Diversity at Amazon.”

The effort came after HBS came under attack by a former faculty member, students and alumni in the wake of George Floyd’s murder and the Black Lives Matter movement. The number of cases featuring Black protagonists in the first-year required curriculum (RC) had been in the single digits, actually just two out of some 250 to 300 cases studied in the core curriculum.

No less important, even those cases did little to shed light on inequality or diversity or, for that matter, on excellent leadership or management. “Of the few cases that center on Black protagonists or topics in the RC,” says Alterrel Mills, who graduated from Harvard with his MBA in five years ago. “Nearly all of them fail to meaningfully engage or discuss the cultural context of race. Radio One, a finance case, is used as a device to teach discounted cash flows but glosses over the additional obstacles Black entrepreneurs face in raising capital or the future viability of urban media…None of the RC year cases study Black CEOs on the Fortune 500 list.”

Mills wrote a case study himself to draw attention to the lackluster efforts by Harvard to confront its racial failings. The case–entitled The Business School Searches For A New Dean–was written little more than three months after then Dean Nitin Nohria made a rare public apology in June of last year for failing to mount a more successful fight against racism and for not serving the school’s black community members better.

In his case study critique, Mills pointed out that Harvard has never written a case on Kenneth Chenault, one of the most prominent Black chief executives in the world who held the top post at American Express for 17 years from 2001 and 2018. Mills had worked at Amex before going to Harvard. Neither have cases been written on other successful Black corporate leaders such as Don Thompson at McDonald’s, Ursula Burns at Xerox, or Roger Ferguson at TIAA-CREF.

A case on Merck CEO Kenneth Frazier, the only African-American running a top global biopharma company, focuses on his decision to quit Trump’s manufacturing council in the wake of the president’s unwillingness to single out white supremacy groups in the violent protests in Charlottesville, VA. Another 2016 case on J.C. Penney CEO Marvin Ellison centers on his turnaround plan for the retailer. Both of those cases are in elective courses where few students would gain exposure to them.

When Steven Rogers, who left HBS in 2019 after being a senior lecturer at the school for seven years, had long advocated for more case studies with Black protagonists to no avail. When he confronted Nohria about the absence of case studies with Black protagonists, Rogers recalls the dean saying, ‘Steve, I don’t have control over that. The department heads have control over that.’ So I said well I am going to meet with every course head and ask them to include at least one case study in every course with a black protagonist.’ I met with every single course head and said to them, ‘Here’s the problem. I assume that you believe that diversity and to our students to black men and women are important.’ Nobody disagreed. Some were more positive than others. But the result was virtually nothing.”

Mills seems delighted that Harvard finally stepped up to the challenge. “It’s great to see the number of Black protagonists in HBS’ first-year curriculum finally reached double digits this year after students and alumni have requested representation among the 250 cases taught that first year,” he says. “There is a poetic beauty to seeing an increase in the number of Black protagonists as well as the number of Latinx, AAPI, and Indigenous ones as this is reminiscent of the Immigration and Nationality Act that came one year after the passage of the Civil Rights Act.”

For the past nine decades, the case study has been at the core of the learning experience at Harvard Business School. HBS invented it, put it at the heart of the school’s teaching philosophy, invests massive money and time on it every year, and sells more than 14.5 million cases a year to other schools and organizations all over the world. In short, the case study is equivalent to the Bible in the religion of capitalism. The lack of case studies with Black protagonists has even greater meaning because 80% of the cases studied by MBA students all over the world are from the Harvard Business School.

Jan Hammond, senior associate dean for culture and community, is quoted in the article acknowledging that students have complained about the issue for a long time. “It’s important to note that our MBA students have long shared with us their concerns about the lack of representation among the case protagonists they study every day in class,” he said. “We knew our faculty wanted to help, but I never suspected we’d be able to write so many relevant cases so quickly.”

“Our students are right that protagonist diversity matters,” added Jan Rivkin, senior associate dean and chair of the MBA program. “By studying cases with a wide diversity of protagonists, students learn that talent and leadership come from all background and identities. If students don’t understand that, they’ll worsen inequities, miss out on opportunities for themselves, and miss chances to create opportunities for others.”

According to the article, the drive for protagonist diversity became a focus for the Dean’s Anti-Racism Task Force, convened in June 2020 and comprising faculty, staff, students, and alumni. The effort was led by Professor Robin Greenwood and Carin Knoop, executive director of the HBS Case Research and Writing Group (CRG). The group reached out to the HBS African-American Alumni Association, current students, and faculty to identify promising case leads.

‘WE STILL HAVE A LONG WAY TO GO’

“The creation of more cases led to an important question,” according to the article. “How do we categorize and portray the protagonists in each case so that faculty members can quickly identify them in our database, hopefully leading to more usage? The CRG developed new systems and processes to collect identity information directly from case protagonists and to track the various characteristics of each case.”

“The new categorization process is not only important for internal teaching purposes, but as educational institutions worldwide look to HBS and Harvard Business Publishing to source business cases, being able to have them be easily recognizable should help with adoption and dissemination,” said Senior Lecturer Tony Mayo, a member of the curriculum workstream.

Hammond acknowledges that HBS is far from done. “We still have a long way to go to have cases that reflect the full, rich diversity of human talent, but we now have more confidence in how far we can move, and how fast, when we work together,” he said.