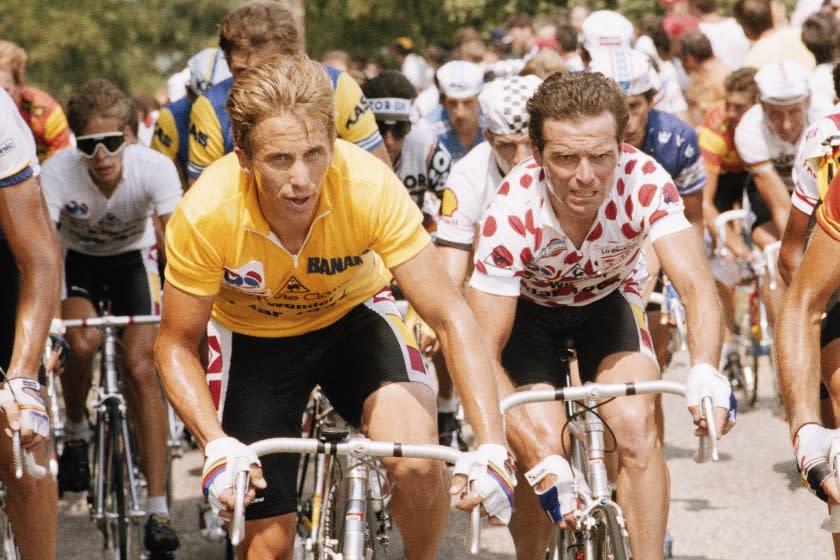 Greg LeMond won his second straight and third Tour de France in five years on this date in 1990 when he cruised along the 113.5-mile final stage from Bretigny-sur-Orge to Paris wearing the leader’s yellow jersey with a 2-minute 16-second lead, which was the winning margin over Claudio Chiappucci of Italy.

LeMond, of the United States, did not win an individual race in the 21-stage, 2,112-mile event, but he wrested away the yellow jersey from Chiappucci two days earlier when he beat the Italian who had held a five-second lead for the previous four stages.

LeMond received valuable assistance earlier in the final mountain stage from his French Z teammates, who stopped to help him fix a flat tire.

“We stopped, got off our bikes and gave Greg a hand,” said Eric Boyer, who with Jerome Simon helped LeMond regroup and eventually close on Chiappucci without losing a second.

1962 — Gary Player of South Africa wins the first of his two PGA Championships when he beats Bob Goalby by a stroke at the Aronimink Golf Club in Newtown Square, Pa. Player, who had missed the 36-hole cut at the British Open at Royal Troon, Scotland, the week before, sees a seven-stroke lead in the final round shrivel to one before he makes a spectacular save out of the trees on the 72nd hole. Player and Goalby are the only players to finish under par.

1963 — In a rematch of their first fight nearly a year earlier, Charles “Sonny” Liston knocks out Floyd Patterson again at 2 minutes 10 seconds of the first round to retain his world heavyweight title at the Convention Center in Las Vegas. Liston is dominant as he decks the challenger three times before the bout is stopped. The victory also gives him the inaugural World Boxing Council title. Liston had won the championship from Patterson with a first-round knockout Sept. 25, 1962, in Chicago.

1984 — Kathy Whitworth, 44, of Texas is the all-time winner in professional golf tournaments when she beats Rosie Jones on the first-extra hole of a playoff at the Rochester International at Locust Hill Country Club in Pittsfield, N.Y. Whitworth makes a par, while Jones just misses a putt that would have kept the playoff going. Whitworth, with 85 career women’s tournament wins, passes Sam Snead’s total of 84 PGA victories.

1996 — Naim Suleymanoglu of Turkey is the first weightlifter in Olympic history to win three gold medals when he sets world records in the clean and jerk in the 141-pound division, hoisting 413¼ pounds as well as a total weight at 738½ pounds at the Summer Games in Atlanta. Suleymanoglu, who stood 4 feet 11 and was known as “Pocket Hercules,” lifts 325 pounds in the snatch. Suleymanoglu had previously won Olympic gold medals at Seoul in 1988 and Barcelona in 1992.

1998 — At the Goodwill Games in Uniondale, N.Y., Jackie Joyner-Kersee ends her brilliant heptathlon career when she wins her fourth consecutive gold medal in the event, scoring 6,502 points to finish ahead of DeDee Nathan of the U.S. at 6,479. Earlier, in the men’s 1,600-meter relay, the United States, led by anchor Michael Johnson, lowers its world record of 2 minutes 54.29 seconds set at the 1993 world track and field championships in Stuttgart, Germany, with a gold-medal finish of 2:54.20. The time is later discounted when Antonio Pettigrew, the team’s second-leg runner, tests positive for a performance-enhancing drug.

2001 — David Duval, wearing his familiar wraparound sunglasses, shoots a four-under-par 67 at Royal Lytham & St. Annes in England to win the British Open, his only major championship. Duval finishes at 10-under 274 for a three-stroke victory over Sweden’s Niclas Fasth. He is the sixth American player in seven years to win golf’s oldest championship.

2013 — Ryan Braun, the National League’s most valuable player in 2011, is suspended without pay for 65 games, which includes the rest of the season and potential postseason, after he and other players are found to have ties to Biogenesis, an anti-aging clinic in Florida accused of distributing performance-enhancing drugs. The Milwaukee Brewers star accepts the ban, which is 15 games more than the one he avoided the previous season when an arbitrator ruled his positive urine test was mishandled.

2017 — Clint Dempsey passes to Jozy Altidore for the go-ahead goal in the 72nd minute, then scores on a free kick 10 minutes later to match Landon Donovan’s American record of 57 international goals, to lead the United States past Costa Rica 2-0 in Arlington, Texas, and into the CONCACAF Gold Cup championship. Dempsey’s free kick goes around a four-man defensive wall from 27 yards out and past goalkeeper Patrick Pemberton on two bounces. The U.S. would go on to beat Jamaica 2-1 in the final at Levi Stadium in Santa Clara.

2018 — Francesco Molinari of Italy wins the British Open at Carnoustie, Scotland, for his first major tournament victory after he breaks away from a pack in the final round that includes Tiger Woods. Molinari shoots a bogey-free, two-under 69 to finish at eight-under 276. He makes birdies at Nos. 14 and 18 to finish two shots ahead of Xander Schauffele, Justin Rose, Rory McIlroy and Kevin Kisner. Molinari is the first Italian to win a major golf tournament.