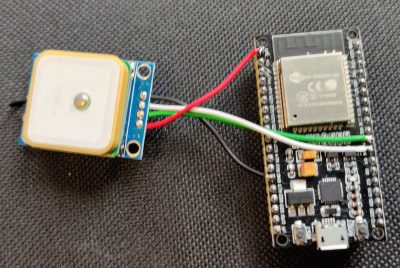 The Garmin HUD+ was a small Bluetooth device intended for the dashboard of a car, meant to be used as a GPS heads-up display for data from Garmin smartphone apps. It used a bright VFD (vacuum fluorescent display) which was viewed through a clear reflector, and displayed GPS information and directions. It was discontinued in 2015, but [Doz] was fond of his and used it happily until a phone upgrade meant it no longer worked. Was it destined for a landfill? Not if he had anything to say about it!

The first thing [Doz] tried was using an alternate Android app, but since it also didn’t work, it was time to sit back and reflect on the scope of the issue. In [Doz]’s case, he really only wanted some basic meaningful data displayed, and decided he could do away with the phone altogether if he had the right hardware.

A u-blox GPS module and ESP32 board were the keys to making a standalone device to display meaningful data on the Garmin HUD+ over Bluetooth, thanks to the fact that the protocol used had been reverse engineered. After a lot of troubleshooting, [Doz] got some basic functions working: speed, time, satellite count, and a working compass arrow. The GPS receiver and ESP32 live in a small 3D-printed enclosure, and the HUD? It stays on the dash just like it always has, forever in 2015, blissfully unaware that the march of smartphone technology has left it behind.

His code is on GitHub and there is a video demonstrating the the unit embedded below, just under the page break. It’s always nice to see VFD displays given new life.