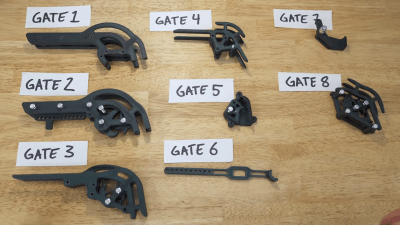 [Martin] of the band [Wintergatan] is on his third quest to build the ultimate musical marble machine, and that means dropping marbles with maximum reliability and precision timing. Working through several iterations, and returning to first principles, he engineered a marble gate that can drop marbles with a timing standard deviation of 0 ms.

[Wintergatan]’s first two machines, Marble Machine and Marble Machine X gained significant attention, but their complexity was their undoing. As it turns out, a Rube Goldberg machine that makes music has a lot of potential failure points, and both machines proved too temperamental for the live stage. The third version, Marble Machine XT (T for “touring”) needed to be re-engineered for simplicity and reliability to be practical on the road.

[Martin] broke the marble machine concept down to its key components, of which the marble drop gate is the most obvious. Using a pair of contact microphones to record the moment of release and impact, he can measure the timing with precision. The first design had a standard deviation of 3.91 ms, which is not nearly enough for us to detect by ear, but is not up to [Martin]’s standard for “tight music”. It used a clock-type escapement mechanism, where the wheel is the release gate. After reviewing his measurement software and compensating for drift between the software components of his setup, the measured standard deviation was reduced by 1 ms. Another breakthrough was to remove any guiding surfaces below the gate and let gravity do all the work. The 8th iteration proved to be the winner and used the escapement arm as the drop gate and wheel to hold back the queue of marbles.

Coming from an arts background, [Martin] had to learn a lot of engineering lessons the hard way. Looking at the videos on his YouTube channel, it seems like he is taking the lessons to heart, and we look forward to seeing the Marble Machine XT come to life.