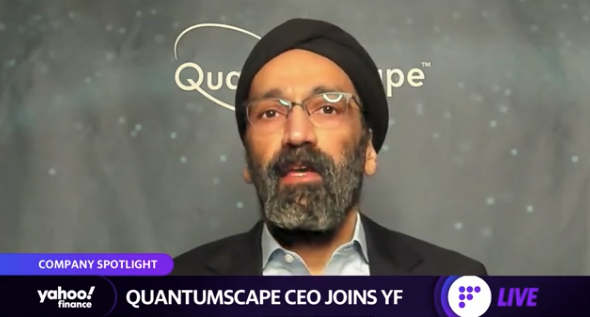 The first day of trading in the New Year wasn’t too kind to the red-hot shares of upstart battery technology player QuantumScape (QS). But its founder Jagdeep Singh is quick to tamp down any speculation the fundamental story has changed overnight.

Somewhat out of nowhere, shares of QuantumScape plunged 41{09c3c849cf64d23af04bfef51e68a1f749678453f0f72e4bb3c75fcb14e04d49} on Jan. 4. According to a source, the sell-off was triggered by the company filing what’s known as a Resale S-1 form on Dec. 31. The market interpreted the filing as the company would be selling shares amid the stock’s surge in value, which would have the effect of diluting investors. Others speculated QuantumScape’s institutional investors are gearing up to sell shares.

Singh tells Yahoo Finance none of that is true and the business fundamentals haven’t changed.

“There has been no change in business. Everything we have discussed with investors remains on track,” Singh says. Singh adds insiders are not readying to dump stock, and that the blow-off top in the stock Monday likely reflects more momentum traders booking profits. “I hate to see the stock do that, but we remain focused on the long-term.”

QuantumScape sought to clarify its aforementioned filing on Tuesday.

To say this type of harsh reaction in the stock hasn’t been the norm for QuantumScape shareholders would be an understatement. Shares exploded 388{09c3c849cf64d23af04bfef51e68a1f749678453f0f72e4bb3c75fcb14e04d49} from when it merged with a blank check company on Nov. 27 and Christmas Eve. At its height, the pre-revenue tech company boasted an eye-popping $50 billion valuation.

QantumScape was founded in 2010 by Singh and backed early by Microsoft founder Bill Gates and auto giant Volkswagen. It recently took a big stride in bringing a major battery technology to market, hence fueling a major run-up in its stock price.

Singh tells Yahoo Finance he and his team remain focused on road-testing the battery technology and then scaling up manufacturing.

Brian Sozzi is an editor-at-large and anchor at Yahoo Finance. Follow Sozzi on Twitter @BrianSozzi and on LinkedIn.