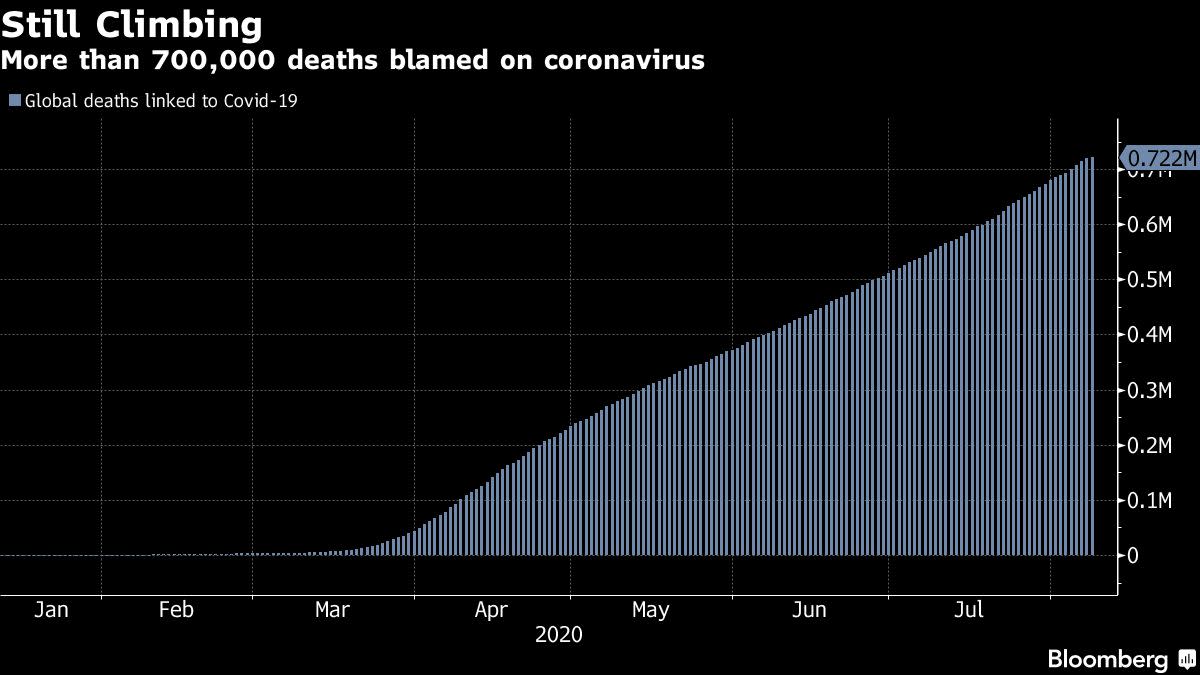 Brazil’s death toll surpassed 100,000 and cases breached 3 million in the world’s second-biggest coronavirus outbreak. U.S. cases are hovering around 5 million, with Texas hitting a record for positive tests and deaths increasing in California.

President Donald Trump ordered a range of pandemic relief after talks with Democrats stalled. A $765 million federal loan to Eastman Kodak Co. to speed production of drugs is on hold pending allegations of wrongdoing.

Germany’s transmission rate rose to the highest level in 10 days. Prime Minister Narendra Modi is facing rural hotspots in India that are contributing to one of the world’s fastest-growing outbreaks.

The U.K. will need more than just a simple communication campaign to ensure people get a potential coronavirus vaccine after research showed that less than a third of the population would definitely seek to be inoculated.

Vietnam reported 2 new infections, according to the health ministry. The nation has confirmed local 355 infections since the outbreak in the coastal city of Danang July 25 and has a total of 812 cases with 10 deaths. A day earlier, it reported 21 new infections, 20 of which were tied to Danang.

“Today is a tough day in our fight against Covid-19,” Beshear said. “Folks, we need your help. This is the time where we need to buckle down and do what it takes to get this virus under control. Please stay safe and take this seriously.”

On Friday, the Democratic governor extended a statewide mask mandate that began July 10 for 30 more days.

Brazil topped 3 million coronavirus infections as Covid-19’s footprint widens, spreading misery from the beaches of Bahia to the soybean fields of the vast interior.

Cases in Brazil reached 2 million less than a month earlier. The country reported 49,970 new cases Saturday and 905 deaths, raising the death toll to more than 100,000.

A $765 million government loan to Eastman Kodak Co. announced less than two weeks ago is on hold pending probes into allegations of wrongdoing, the U.S. International Development Finance Corporation said in a tweet.

The loan, announced July 28, was the first of its kind under the Defense Production Act in collaboration with the U.S. Department of Defense. It was intended to speed production of drugs in short supply and those considered critical to treating Covid-19, including hydroxychloroquine, the controversial antimalarial drug touted by President Donald Trump.

Congress and the Securities and Exchange Commission are investigating the deal, and Kodak’s board said Friday it is also opening a review of the loan disclosure.

Trump went ahead as the White House and congressional Democrats remain trillions of dollars apart on key issues, including aid to state governments and the amount of supplementary unemployment benefits.

The measures include authorizing Treasury to allow companies to defer payroll taxes for Americans making less than $100,000 a year, and providing $400 a week in expanded jobless benefits.

South Africa reported 301 more coronavirus deaths on Saturday, bringing the total to 10,210. There area 553,188 cases, the most in Africa and the fifth-most in the world, Ministry of Health data showed.

Romania, which has the highest death toll in eastern Europe, reported the fourth consecutive day of more than 1,300 new cases, increasing the total to 60,623.

Amid the summer holiday season, the government has imposed restrictions in several counties and in Bucharest, the capital, including mandatory face masks in crowded outdoor places. Authorities have increased fines and police patrols at Black Sea resorts. Romania’s death toll stood at 2,659 on Saturday.

Ireland reported the most new cases since May 15, a day after the government tightened restrictions on movement in some parts of the country to control fresh virus outbreaks. There were 174 new cases with one death, the health ministry said in a statement. Of the cases, 118 are in the three counties where the government has reinstated a partial lockdown. Ireland has seen 26,644 cases so far, with 1,772 deaths.

The Mid-American Conference announced it will cancel its fall season over Covid-19 concerns, making it the first league competing at college football’s highest level to make such a decision.

The conference intends to “provide competitive opportunities for the student-athletes” during the spring semester of 2021 and has begun formalizing the spring plan under consultation with medical experts. At this time, it has made no decisions regarding winter sports.

Italy reported 347 new coronavirus cases on Saturday, near the average level for the week, with the exception of Friday when the cases reached 552 on an outbreak at a migrant reception center. Total cases reported since late February rose to 250,103.

Danish Crown, Europe’s biggest pork exporter, said it will close down a slaughterhouse for at least a week after a rise in the number of workers infected with Covid-19.

The facility in Ringsted, southwest of Copenhagen, registered another 22 cases on Saturday, bringing the total to 142, Danish Crown said in a statement. Since registering the first case last week, the company has introduced extensive testing of the roughly 850 workers at the site, but the number of infections continued to rise. 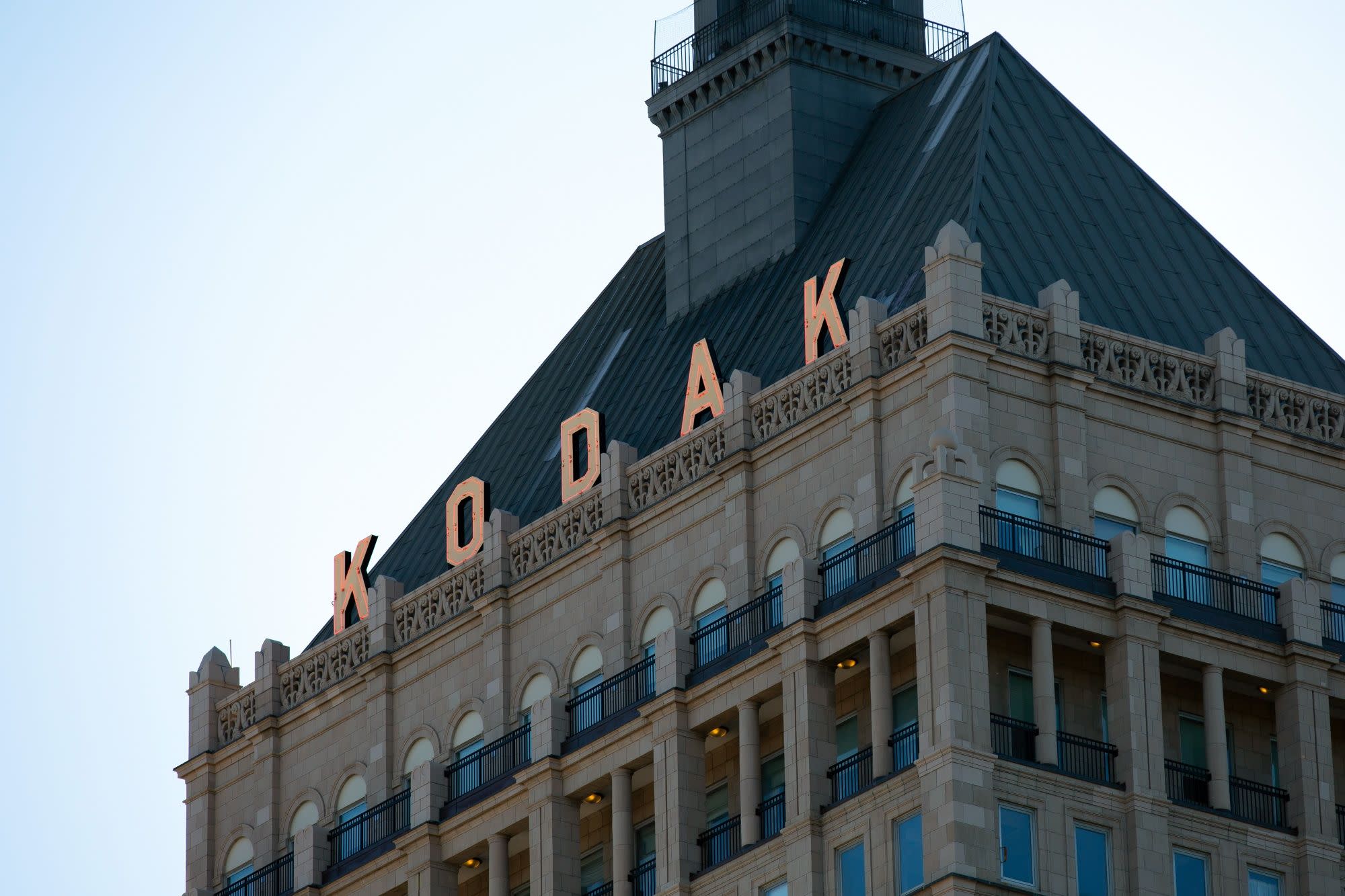 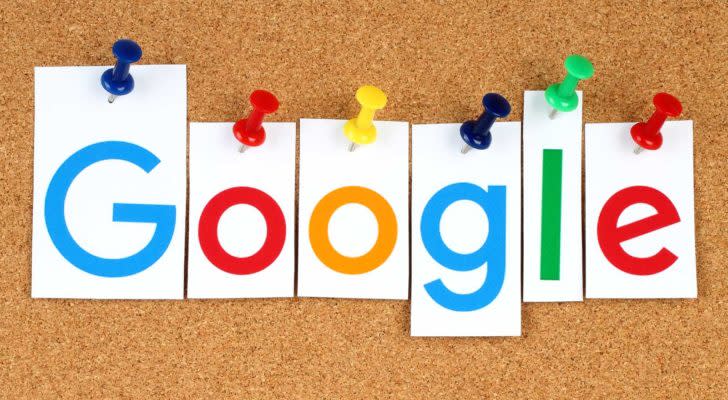