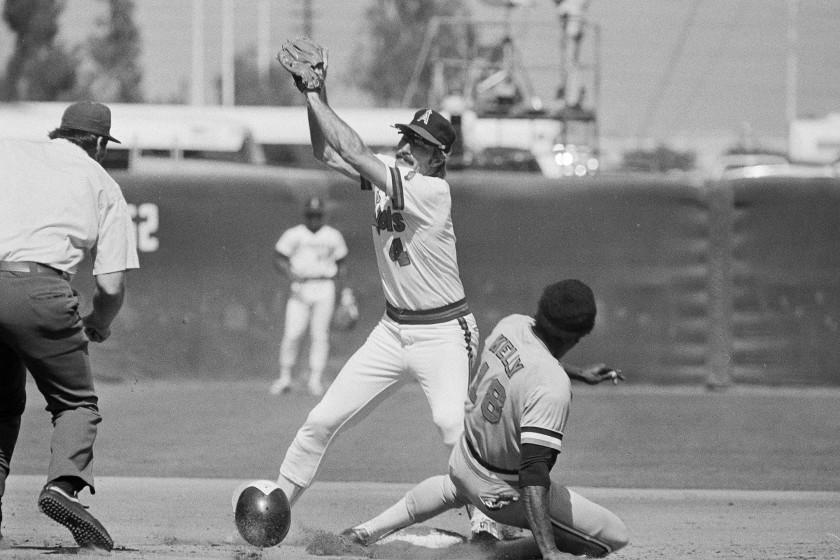 The Angels sail into the All-Star break with a two-game lead in the American League West on this date in 1979 when Bobby Grich hits a two-run, two-out ninth inning home run to beat Ron Guidry and the New York Yankees 5-4 on a Sunday afternoon at Anaheim Stadium.

Grich’s 19th home run of the season caps an Angels comeback from being down 4-0 to Guidry, the 1978 Cy Young Award winner, and it is the team’s 13th win in 16 games. The night before, the Angels came back to beat New York in 12 innings after trailing 6-0.

“He got the ball up in the jet-stream,” said Yankees manager Billy Martin of Grich’s blast. “The ball takes off.”

A smiling Grich replied, “Well, tell him that jet-stream is all the weight-lifting I did last winter. That’s the jet-stream.”

1912 — Jim Thorpe wins gold medals in the 15-event pentathlon and decathlon at the Summer Olympics in Stockholm. At the closing ceremony, Sweden’s King Gustav V proclaims Thorpe the world’s greatest athlete. Thorpe’s reply is “Thanks, king.” The next year, Thorpe is stripped of his medals by the International Olympic Committee for taking expense money to play baseball prior to the 1912 Games, a violation of the IOC’s rules on amateurism. They are reinstated in 1982.

1961 — Arnold Palmer shoots a four-round total of 284, four-under par, at Royal Birkdale Golf Club in Southport, England, to win the first of two straight British Opens, a stroke ahead of Dai Rees of Wales. Palmer is the only American player to finish in the top 10. Gary Player of South Africa, who had won the Masters in April and the British Open in 1959, withdraws in the third round with a stomach disorder.

1967 — Roberto De Vicenzo of Argentina wins his only major championship when he beats defending champion Jack Nicklaus by two strokes in the the British Open at Royal Liverpool Golf Club at Hoylake, England. It is the 44-year-old De Vicenzo’s 10th try at winning the Open and he shoots a final-round two-under-par 70 for a 278 total. Player and Clive Clark of England finish tied for third. Like Palmer in 1961, Nicklaus is the only American to finish in the top 10.

1990 — Taking advantage of Patty Sheehan’s misfortune, Betsy King digs herself out of an 11-shot deficit over the final 33 holes to win her second straight U.S. Women’s Open on the Riverside Course of the Atlanta Athletic Club in John’s Creek, Ga. Sheehan, who leads after each of the first three rounds, lets an eight-shot advantage evaporate over the final 23 holes. King is the fifth of seven players to win consecutive Opens and her total of 284 is one stroke better than Sheehan.

1991 — Sandhi Ortiz-DelValle is the first woman to officiate a men’s professional basketball game when she calls a U.S. Basketball League contest between the New Haven Skyhawks and the Philadelphia Spirit at Holy Family College in Philadelphia. Ortiz-DelValle had officiated in pro-am leagues in New York and Los Angeles since 1984. She goes to work for the USBL after officiating the Pro-Am National Championship, and her whistle and jersey are requested for display by the Basketball Hall of Fame in Springfield, Mass.

2000 — Lennox Lewis stops No. 9-ranked Francois Botha of South Africa at 2:39 of the second round with a devastating four-punch combination that sends the challenger through the ropes to retain his World Boxing Council and International Boxing Federation heavyweight titles at the London Arena. Botha manages to land just nine punches in the bout.

2005 — Michelle Wie misses a chance to play in The Masters when Clay Ogden, a junior from Brigham Young, birdies four of the first five holes and then eases his way past the 15-year-old Punahou (Hawaii) High junior to win 5 and 4 in the quarterfinals of the U.S. Amateur Public Links at Lebanon, Ohio. The loss ends Wie’s quest of becoming the first woman to be invited to play in The Masters.

2007 — In their 125th season in the major leagues, the Philadelphia Phillies lose their 10,000th game 10-2 to the St. Louis Cardinals at Citizens Bank Park in Philadelphia. The franchise, which started out in 1883 as the Philadelphia Quakers and was also known as the Blue Jays in the mid-1940s, falls to 8,810-10,000 when the Cardinals hit six home runs, including two by Albert Pujols.

2010 — Rory McIlroy, 21, from Northern Ireland, ties the major championship record by shooting a nine-under-par 63 in the opening round of the British Open at the Old Course at St. Andrews, Scotland. McIlroy gets things rolling with an eagle on the par-four ninth hole after he drives the green and rolls in the putt. He continues the assault with six birdies on the back nine.

Previous post The 5 best workouts for women over 50, according to fitness pros