There is a likely apocryphal company from the 1720 South Sea financial bubble, a long-forgotten stock market craze in England caused by the rapid appreciation and collapse in the stock of a proposed slave-trading company. Companies were created left and right, many with unclear purposes, including one venture: “For carrying-on an undertaking of great advantage but no-one to know what it is.”

That’s a good summary of what special purpose acquisition companies, or “blank check” companies, are: Investors are expected to trust a management team to find good business ventures to finance. SPACs gain their existence from loopholes in securities laws that make it easier to launch companies on the stock market through a SPAC than a traditional initial public offering, with much more leeway to make claims about future performance.

SPACs have attracted recent attention because of Pine Island Acquisition Corp., a SPAC with close ties to the Biden administration that is seeking to merge with a defense company. Secretary of State nominee Antony Blinken is an “adviser” to the firm. Defense Secretary nominee Lloyd Austin is also affiliated with the firm, as is Michèle Flournoy, who was also being considered for defense secretary. Director of National Intelligence designate Avril Haines is employed by Westexec Advisors, the Blinken-headed consulting firm that is closely associated with Pine Island. Pine Island went public six days before Blinken’s nomination was announced.

The SPAC market has grown rapidly, accounting for over 40 percent of the total initial public offering market in 2020. In 2019, there were just 59 SPAC IPOs, and they raised $13.6 billion in total. By 2020, there were 248 raising $83 billion in capital — a growth of over 600 percent in just one year. This rapid growth has resulted in problems. One of 2020’s most vaunted SPACs launched the electric truck maker Nikola Corp. But it turns out that the company had used a nonfunctional prototype in its promotional materials, and its stock cratered. 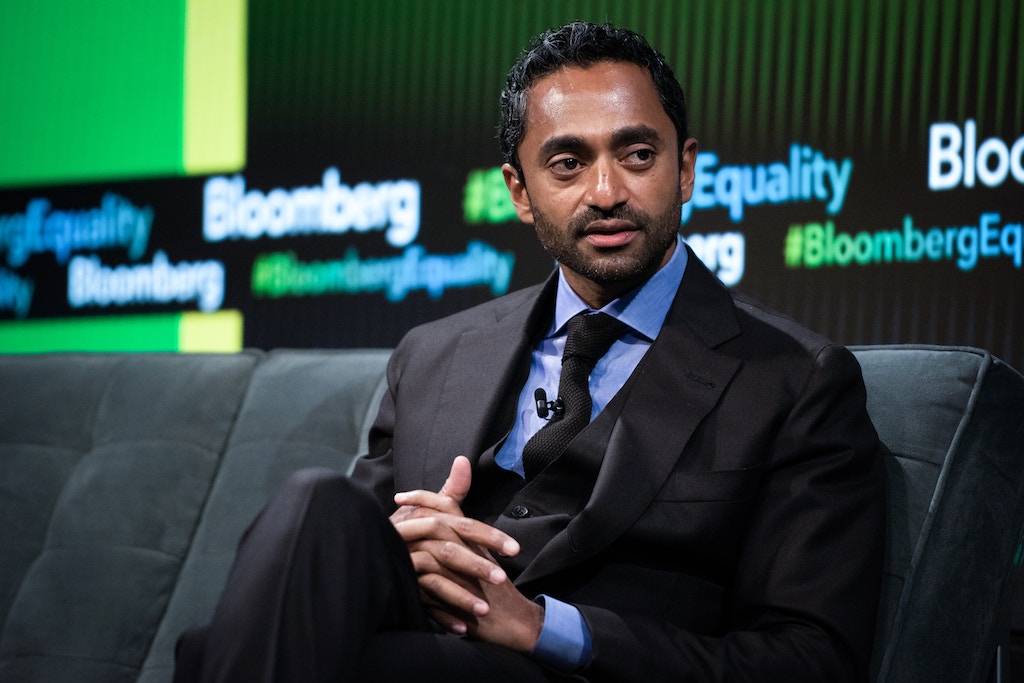 Chamath Palihapitiya, founder and chief executive officer of Social Capital, listens during the Bloomberg Business of Equality conference in New York on May 8, 2018.

A review of financial disclosure documents shows that Blinken also has a business relationship with Chamath Palihapitiya, who has sponsored six SPACs with his company Social Capital over the past few years, making him one of the most active participants in the space. Blinken has an equity stake in the general partnership of Social Capital.

Jeff Hauser, the co-executive director of the Revolving Door Project at the Center for Economic and Policy Research, raised the possibility that Blinken could be paid more than the actual worth for his stake in the Social+Capital GP. “The illiquidity and opacity of the investment means that an overpay would be very difficult to prove by any third party,” Hauser said, and that as a result, Blinken could be “subject to additional capture by a wealthy and active investor.”

“Blinken has no formal finance background. Why is someone like him involved at the general partner level of a SPAC issuer?”

In a request for comment from The Intercept, a spokesperson for President-elect Joe Biden’s transition team said that Blinken “provided this California-based company with broad geopolitical advice on longer-term investments focused on solving hard problems like curing cancer and space exploration. He did not take part in the firm’s day-to-day operations, fundraising, or investment decisions.” The spokesperson additionally said that Blinken did not invest any of his money in the firm and that he will sell his full interest if confirmed.

“SPACs essentially require investors to have blind faith in the acumen — and the connections — of the people who spawn them. They are deserving of more regulatory scrutiny, especially as they have generally proved to be losing propositions for investors,” said David Segal, the executive director of Demand Progress, which has been advocating accountability in the Biden transition.

“The various associations between top players in Biden’s orbit and SPACs raise concerns that they won’t be subject to serious scrutiny. The Pine Island SPAC is especially concerning because, by its own admission, connections to revolving-door figures are a driving facet of its value proposition, and it raised hundreds of millions of dollars as many of its principals were considered top contenders for Biden administration posts.”

Beyond the Nikola affair, other research shows that SPACs have been a bad deal for investors.

A report from Wall Street research firm Renaissance Capital in September found that while most SPACs do not make it to the final stage where they merge with a company and go public again, the 89 that have “delivered an average loss of 18.8% and a median return of minus 36.1%. That compares with the average after-market return from traditional IPOs of 37.2% since 2015.” Those returns are also well below the S&P 500 during that time frame, which returned 76.3 percent.

SPACs have a complex setup, but Andrew Park, a senior policy analyst with Americans for Financial Reform, argues that there are core problems with the model. “The first problem is incentives when you issue these SPACs,” said Park. “The SPAC sponsor gets 20 percent. No matter what, they get it for free,” which helps to explain the draw of celebrities, including Shaquille O’Neal, and government insiders to the space. That means that “everyone is incentivized to do as many deals as possible.” Hedge funds will buy the SPAC shares at a deep and undisclosed discount prior to going public, which means that they make money regardless of whether the business plan is sound. Because of the incentive misalignment, “there’s now a worry about how good SPAC sponsors are at due diligence. They automatically get 20 percent for raising the money. They’re going to chase after these private companies and good chance they’re going to overpay for them because they are acquiring a lofty valuation.” Finally, “the end investors are not sophisticated,” with many small retail investors drawn to the SPAC space because of the hype around them — in part due to the SPACs’s ability to make claims about future performance that companies going through a traditional IPO are not able to do.

The Biden transition team declined to comment as to whether or not they would support additional regulatory scrutiny for SPACs. Palahipitiya, the SPAC sponsor who works with Blinken, donated over $1 million to Democratic Party committees and super PACs in 2020.