Behind the Scenes of His Wellness and Parenting 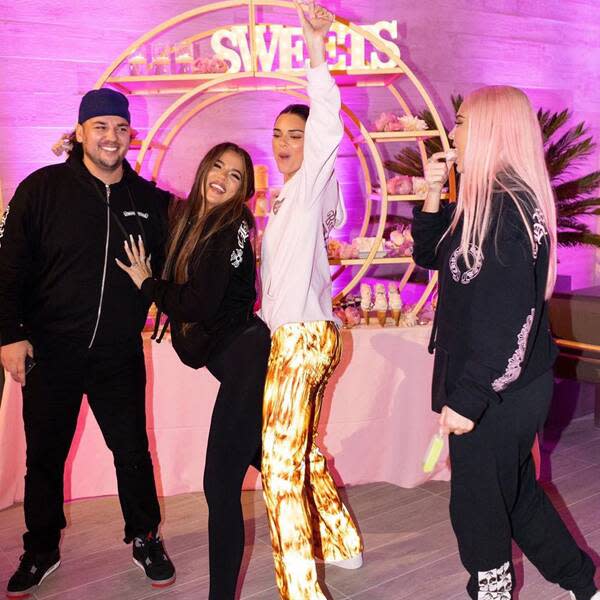 In the recent words of Rob Kardashian, “Woo back baby.”

Indeed, as evidenced by photos posted to his official Instagram account from over the weekend, the typically private Kardashian brother had stepped back into the spotlight in honor of his sister Khloe Kardashian‘s surprise 36th birthday party on Saturday.

Dream Kardashian‘s famous dad smiled in shots shared to social media, which captured him with his well-known sisters, as well as Tristan Thompson and Scott Disick.

It didn’t take long for the rare Rob sighting to get the attention of the Internet as fans gushed about unexpectedly getting to see him.

The compliments also poured in over Kardashian’s appearance with many commenting that he both looked good and happy.

According to a source, the star is happier “than ever” as he focuses on his daughter and his health.

“Rob has been thriving during quarantine,” the source said. “He is loving spending time with Dream and entertaining her with activities. He is always sharing her milestones with his sisters and loves teaching her new things. Dream is his number one priority.”

As for his own well-being, “Rob’s been continuously putting effort into his health and wellness and is happier than ever,” the source noted. “He still works out with a trainer here and there, but has really been working on his healthy eating habits. This has been a game changer for him.”

“He’s doing great and is in a good headspace,” the source added. “He seems happier than ever and is enjoying being around in social settings more.”

And, while fans don’t typically see as much of him on the family’s reality show, behind the scenes, he isn’t far from them.

The Kardashian matriarch also shared photos of Rob at the party over on her Instagram page, captioning a shot of him with Kourtney Kardashian, “These two cuties.”

I was sure my parenting had made our baby’s first flight go smoothly. Then came the return trip | Arwa Mahdawi