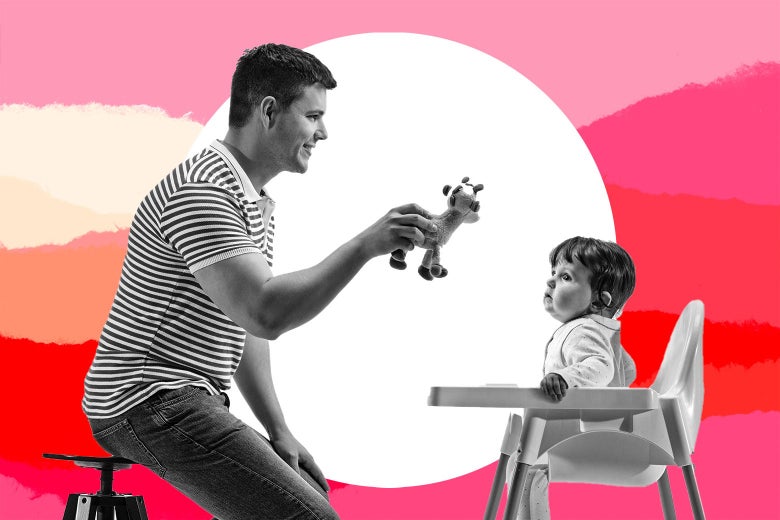 Slate Plus members get more Care and Feeding every week.

My husband and I are first-time parents, and we are over the moon to both be working part-time at home so we can care for our little one, who is now 6 months old. My mother lives with us and interacts with our daughter every day, but we three are the only humans the baby sees on a regular basis for weeks at a time. My mother and I talk a lot and we both read and sing to her to help her develop her language skills.

Unfortunately (in my opinion), my husband cannot seem to communicate with her without resorting to babytalk! I can’t stand it. It particularly bothers me since some of the first parenting advice I ever got was, “Don’t use babytalk when you talk to your child!” (It’s a pity my husband wasn’t there to hear said advice.) I want to be clear: By babytalk, I mean every single word he says to our child is mispronounced: “widow” instead of “little,” “da” instead of “the,” “booty-faux” instead of “beautiful,” etc. Yes, there are times (when he is frustrated while caring for her) he will start to speak like an adult, but his voice will rise almost to a shout before he checks himself.

He is really trying. What he doesn’t seem to be aware of is how much he uses babytalk, and I worry that this will hinder our child’s language development. I have urged him to speak normally to her, but when I bring it up, he takes it personally, like I’m criticizing him. I don’t want to nag him, so when the three of us are together I will often just repeat in a normal voice what he says in babytalk. I do it in a way that sounds like I’m reinforcing what he is saying (so he doesn’t seem to mind), but echoing everything he says with properly enunciated words is tiring for me.

I can’t help wondering how long this will go on. I don’t want to put him on blast at our next pediatrician’s appointment, but I’m considering asking the doctor for advice about how to talk to our daughter when my husband is there to hear the answer. I’m pretty sure he’d listen to an M.D. over me!

He takes it personally, as if you’re “criticizing him,” because you are.

Listen, I hate babytalk too. I like to talk to children, even newborns, as if they’re adults. That’s my jam. But it isn’t everybody’s. And just because this happened to be the first piece of advice you were given about being a parent, that doesn’t mean it’s the important advice. Two out of the three adults your daughter spends the majority of her time with don’t use babytalk. She’ll be fine, I promise. How long will this go on? If your husband doesn’t quit on his own, eventually she will ask him to cut him out. It’s never a great idea for one parent to try to control the way the other parent interacts with their child, unless something dangerous is going on (a whole different subject). I know this habit of your husband’s is annoying. Is it annoying enough to change how you feel about him? (If so, that’s another different subject.) But in terms of your daughter’s “language development,” I just don’t think it’s that big a deal. Keep modeling the alternative. Maybe he’ll pick up on it on his own. But other than that, I’d lay off him, honestly. You said it yourself: He’s really trying. It seems to me he’s doing the best he can with what he’s got. Cut him some slack.

I’m about to get married and am caught in an argument between my fiancée and my parents. This will be the first time in over five years that our whole family will be together. My parents want to take a picture of just them, me, and my siblings, and a family photo obviously means a lot to them. My fiancée heard this and became immediately offended. She says it’s rude to exclude her on the day she “joins the family” and any family photo should therefore include her in it. We’re not talking about taking an hour for a separate family photo shoot; my parents simply want one photograph of themselves and their children. I don’t understand why my fiancée is so annoyed and now she’s even more angry because I’m not supporting “her side.” Should I back up my fiancée on principle, even if I disagree with her?

How can parents help babies learn to calm themselves?

Parenting In Focus: Healthy touch is good for you, your baby and everyone in the family