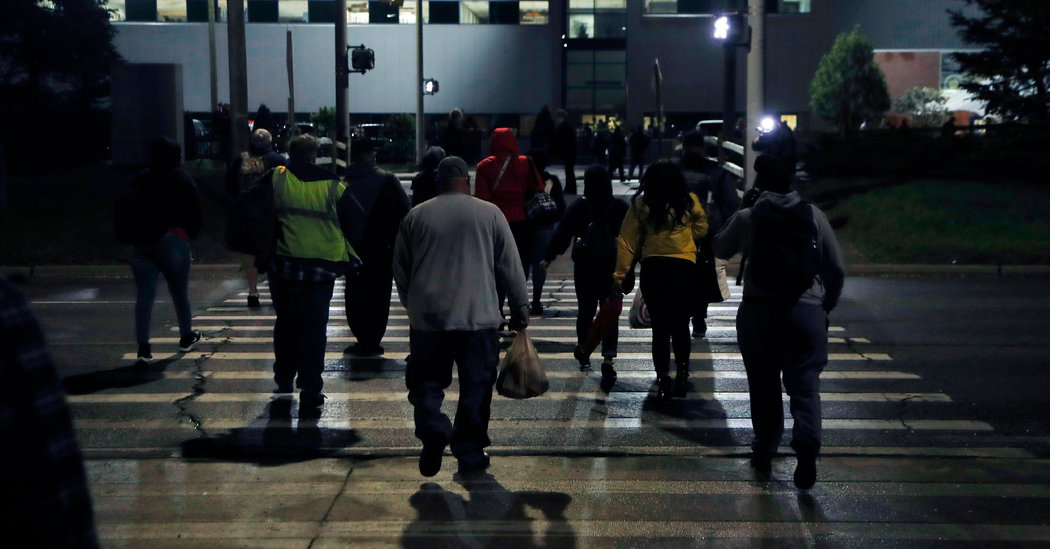 Automakers are back to building cars and trucks at full speed — at least for now. But as coronavirus cases rise across much of the country, it may become difficult for the companies to keep at it.

This week, General Motors will lay off a third shift of workers — about 1,250 people — at its truck plant in Wentzville, Mo., where absenteeism has been rising because workers are concerned about the spread of the virus. Union workers at a G.M. plant in Texas, where hospitals have been inundated, have called on the company to shut down their factory.

The auto industry, which accounts for about 4 percent of the country’s economic output, came to a near standstill in mid-March for nearly two months as the first wave of coronavirus cases spiked. Fiat Chrysler, Ford Motor, General Motors, Honda, Toyota and other manufacturers are now running almost all of their plants in the United States on two or three shifts, which amounts to full capacity.

The revival has helped automakers restock depleted dealer lots and cater to a rebound in demand that has been driven in part by people who feel they need a car for social distancing during the pandemic. Car sales in June were down from a year ago but were more robust than what analysts had expected.

But conditions are changing fast. Gov. Gavin Newsom of California on Monday ordered restaurants, wineries, movie theaters and other businesses to halt indoor operations. He stopped short of closing factories — such as the Tesla plant in Fremont, which employs some 10,000 workers — but he suggested that he was open to restricting economic activity further if the pandemic worsened.

“We’re going back into modification mode of our original stay-at-home order,” Mr. Newsom said. “This continues to be a deadly disease.”

Regardless of what governors, mayors and other policymakers order companies to do, auto manufacturers will most likely be forced to make changes like reducing shifts and temporarily closing plants, said Erik Gordon, a business professor at the University of Michigan.

“Every plant has a lot of workers, so there will be at least a few workers at every plant that come down with Covid,” he said. “When that happens, other workers will fear that they will be next. No matter what the states allow, it will be hard to keep the plants operating.”

Last month, members of the United Auto Workers union called on G.M. to shut down a sport-utility vehicle factory in Arlington, Texas, in response to the rapid spread of the virus in that state. On Monday, Toyota said it had seen an increase in coronavirus cases among workers at its plant in San Antonio, but the company declined to disclose how many people had taken ill.

Auto plants bring several thousand workers together under one roof every day. Manufacturers have taken a range of precautions to prevent infections among workers, including the use of masks, gloves and face shields. Companies are also monitoring the body temperatures of workers, making time for sanitizing work areas and adding barriers to shield people who need to work close to one another to complete certain tasks.

Car companies are reluctant to halt production again, fearing what it would do to their finances just as they were recovering from the shutdown in the spring. Layoffs would also be difficult for workers. The extra $600-a-week supplement to unemployment insurance authorized by Congress in March, which helped many autoworkers, ends on July 31. It is not clear if lawmakers will extend the benefit.

Shortly after factories reopened in May, some automakers temporarily shut down plants after workers — usually just one or two — tested positive for the coronavirus. No automakers have reported widespread outbreaks like those that have affected meat-processing plants.

“Since restarting our operations, we have not had any spread of the virus in our plants,” said Jodi Tinson, a spokeswoman for Fiat Chrysler. “Where we have had an employee test positive, social distancing, mandatory use of personal protection equipment, and cleaning and disinfecting have been in full use.”

Some of the most closely watched plants are in Texas, which has had more than 265,000 cases, and has been averaging more than 9,000 new cases a day for the last seven days.

A G.M. spokesman, Dan Flores, said the company was confident that the many safety measures it had put in place at factories would protect employees.

“People on our team should not be concerned about coming to work,” he said. “All of our facilities are following protocols that are working very well to keep people safe by reducing the possibility that Covid-19 can enter the plants and spread within the plant.”

G.M. requires all employees to wear masks, practice social distancing and wash hands frequently. The company said it would eventually restart a third shift at the Wentzville factory, but can’t say when that might happen.

Toyota has idled its plants in Texas, Alabama, Kentucky, Mississippi and Canada this week as part of a planned summer shutdown.