3 Electric Vehicle Stocks to Avoid at All Costs in 2021 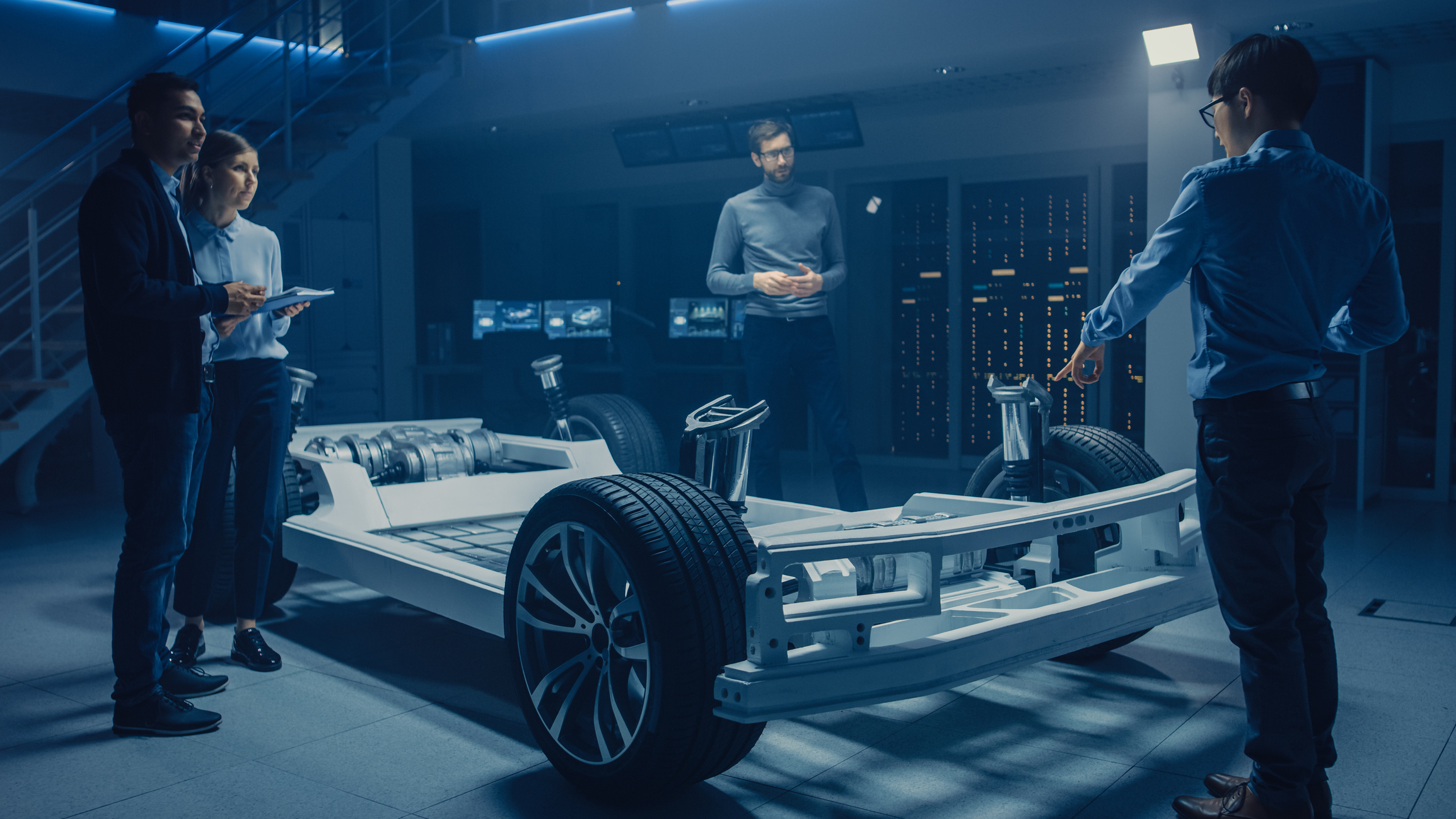 Electric-vehicle stocks have charged higher in 2020, with investors enthusiastically buying into the revolution that is disrupting the automotive industry.

The potential is real, but the stocks appear to be getting ahead of themselves. Many of the companies surging higher have yet to generate any meaningful revenue, and even those that are selling products are trading at very un-auto-like valuations.

Some of these companies will turn into long-term success stories, but for now the stocks look frothy. Here is why three Fool.com contributors are avoiding buying QuantumScape (NYSE:QS), ElectraMeccanica Vehicles (NASDAQ:SOLO), and Tesla (NASDAQ:TSLA) heading into 2021.

This battery stock is overheated

Lou Whiteman (QuantumScape): I’m a current QuantumScape shareholder, so it might sound strange for me to advise others to avoid it. Bottom line up front: I love the potential for this company, but I can’t even begin to justify the current valuation.

QuantumScape is developing a solid-state lithium-metal battery that in theory has a lot of advantages over the lithium-ion batteries currently in use. The solid-state battery, on paper, should be more stable and offer greater energy density than the current generation of batteries. That means it should be safer and offer more miles per charge.

The company recently said it believes it can make batteries that can be charged in just 10 minutes, which would make EVs more competitive against a quick-refueling internal combustion engine.

The potential is substantial, but there are a lot of “ifs” for now. QuantumScape believes it will take five to seven years to roll out its batteries at scale. And it is hardly alone in pursuing the technology, with Toyota Motors among the deep-pocketed competitors. 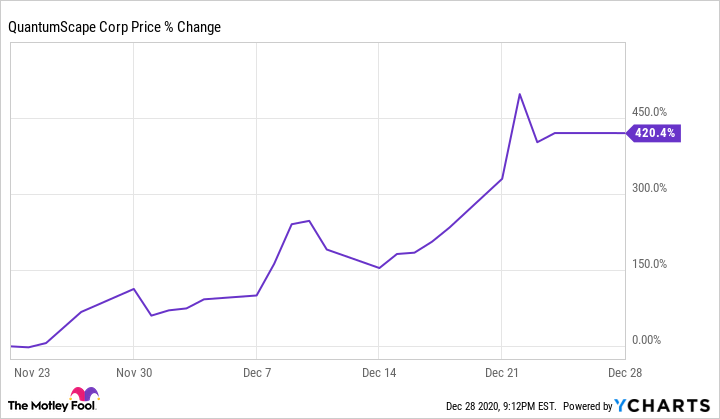 The issue is the market has already priced in that potential. QuantumScape shares are up more than 400{09c3c849cf64d23af04bfef51e68a1f749678453f0f72e4bb3c75fcb14e04d49} in its six weeks as a publicly traded company, giving the company a market capitalization of more than $40 billion as of this writing. By comparison the market values both Ford Motor and Fiat Chrysler Automobiles at about $35 billion apiece.

Even if all goes to plan, I’m not sure a battery maker is worth that sort of valuation. And given the risk involved and the long time table, there is no way to justify it today.

A month ago you could justify buying QuantumScape as a small piece of a diversified portfolio and then hoping for the best. But after the recent gains, this is a stock for the radar screen at best. QuantumScape’s current share price is elevated by a euphoria that I believe is unlikely to sustain until the company is shipping product. This company has great engineers, but they haven’t figured out a way to allow the stock to defy the laws of gravity forever.

This is not the Tesla-fighter you’re looking for

John Rosevear (ElectraMeccanica Vehicles): I know there are people who love this stock, but I don’t. To be blunt, as electric-vehicle start-ups go, ElectraMeccanica doesn’t have much going for it.

For those who might not have heard of ElectraMeccanica, it’s a Canadian start-up that makes a quirky little vehicle called the Solo, a three-wheeled single-seat electric commuter vehicle. The Solo has a top speed of 80 miles per hour, a range of about 100 miles, and it starts at $18,500. The company plans to use the funds it raised by going public to build a factory in the United States, and it’s currently considering sites in Arizona and Tennessee.

Sounds OK, right? Hang on. ElectraMeccanica shipped its first vehicles in the third quarter, but they didn’t go to actual customers. The company said that the first batch of Solos will be used “specifically for high ROI activities, including press events, marketing, retail distribution, test drives, corporate and advertising purposes as well as fleet demonstrations.”

ElectraMeccanica lost almost 15 million Canadian dollars last quarter, which isn’t all that much in the grand scheme of things — and not surprising, given that it shipped its first products in the quarter — but it’s three times as much as it lost in the year-ago period. It’s not clear when actual revenue will start coming in, much less actual profits.

The good news is that ElectraMeccanica had about CA$100 million in the bank as of the end of the third quarter, so it can continue to ride for a while. But I don’t see anything here to justify its current $520 million market cap — much less a big increase over the next year. At least for now, I think that auto investors interested in electric-vehicle stocks are best served by overlooking this one.

Rich Smith (Tesla): On the face of it, finding electric vehicle stocks to avoid in 2021 looks almost too easy. After all, most of the hot names in the sector — NIO, QuantumScape, Electrameccanica — have no profits to their name, and may never earn anything. In contrast, Tesla is the biggest kid on the electric block, with five straight quarters of positive earnings under generally accepted accounting principles (GAAP) to its credit, and an excellent chance of hitting its target of delivering 500,000 electric cars this year. Tesla is finally a viable car company, and qualitatively better than any of those other EV stocks named.

So why am I picking Tesla as my electric vehicle stock to avoid in 2021? Precisely because it has become a viable company — and can finally be valued as an established business, rather than just a “story stock.”

Think about it. What did Tesla have to do to be adjudged a “success” in 2020? Simply reporting any positive GAAP earnings at all in the first and second quarters of 2020 was enough improve over its perfornace in Q1 and Q2 2019, when the company lost money. Earning a mere $0.27 a share in the third quarter of 2020 was enough to improve over Q3 2019’s $0.16 profit.

But now that Tesla has earned profits in each quarter of 2020 (it’s presumed to have earned a $0.68 per share profit in the fourth quarter, according to data from S&P Global Market Intelligence), and grown its earnings sequentially as well, what will Tesla need to do in 2021 to be considered successful?

Logically, investors will want to see earnings continue growing, both sequentially and year over year. And yet, analysts predict that the company’s very first quarterly report of 2021 will feature a slight decline in earnings from Q4 levels. And every quarter thereafter will hold the potential for Tesla to disappoint investors — by earning less than the quarter before, or simply growing less than expected year over year.

Perversely, in contrast to all the EV start-ups on the market today, now that Tesla is “a real company,” it’s going to be judged by the standards usually applied to real car companies like Ford and General Motors, which operate on single-digit profit margins and carry single-digit P/E ratios in contrast to Tesla’s triple-digit P/E. This, to me, makes Tesla one of the riskiest stocks in the EV sector.