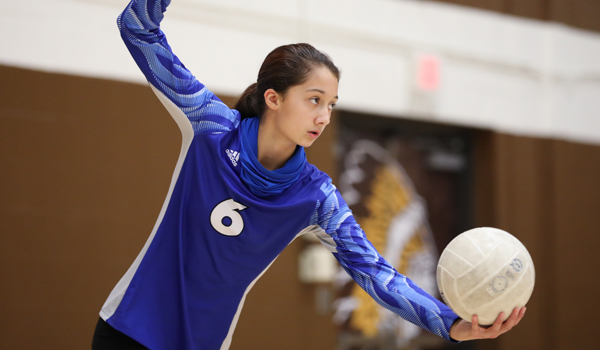 Hillcrest volleyball will be looking for its first double-digit win season since 2016 this year behind a talented group of returning players.

The head of that group is junior Mackenzie Smith. Smith, a junior setter and hitter, earned first-team all-conference honors last season. She was first on the team in kills with 175 and second on the team in assists with 204.

“Mackenzie has an extremely high volleyball IQ. She grew up around the game her whole young life and it shows in her play. She is competitive, wants to see her teammates succeed, and she is extremely coachable. Mackenzie recognizes her weaknesses, and she works extremely hard (even through the off-season) to improve. Mackenzie is not a flashy player. She is very determined, so don’t count her out,” Hillcrest head coach Deirdre Smith said. “Mackenzie will be a big leader for us on the net with her attack, and she will be key in setting up our offense as a setter. Mackenzie has grown a little over the year, so we expect her to be big in the front row. She will need to be aggressive in both of her roles on the team this year.”

Senior Ashlyn Pentecost will step up as a setter this year.

Ashlyn is itching to get on that court and step up into the other setting position that her older sister (Cassidy Pentecost) filled last season. Ashlyn will provide huge defense, and she will be key in feeding some of our most productive hitters,” Smith said.

Kendra Christman will return for her second season on the varsity level as a senior.

“Kendra proves to be highly effective on serve-receive, and we look forward to her leadership on defense this season,” Smith said.

Senior Chloe Sutherland will be a key blocker on the front row.

“Chloe led in blocks for the last two seasons at Hillcrest. Chloe has worked extremely hard to get herself involved in the offense, so I have high hopes for her senior season,” Smith said.

Junior Melanie Barrett will be a key player in the backcourt.

“There’s not many players who can out hustle Melanie. She works extremely hard, and she has the ability to pick up balls that seem impossible,” Smith said.

Tori McCullough will return for her junior year after not playing last year. Her presence will be huge for Hillcrest.

“Tori has worked extremely hard to make a huge comeback. Tori received second-team all-conference accolades her freshman year as our libero, and she is coming back just as fierce as ever,” Smith said. “Tori’s ability to communicate effectively with her teammates, and her ability to be proactive in the back court make her so deadly. With her work ethic, I expect Tori to do big things this season.”

Senior Bridgette Smith returns to the front row for her second varsity season.

“Bridgette will transition from the middle position to a pin hitter this season. Bridgette’s quiet leadership will be very helpful in tough situations as she is a calming force for her teammates,” Smith said.

“We finally have some experience. Several of our athletes have played varsity for the last two to three seasons, and 80% of the varsity squad has played club volleyball, so they all improved their games through all those ball touches too. We are going to work hard to focus on being disciplined athletes, so that we can accomplish goals as a team,” Smith said. “We need to be able to communicate big with each other. I think that having Tori back will help us improve in this area because she’s a very infectious player when it comes to lifting people up.”

Hillcrest will travel to Bolivar for a Jamboree on Aug. 24 before opening the season on Aug. 31 at Willow Springs.

CLICK HERE FOR ALL OF THE FALL SPORTS PREVIEWS