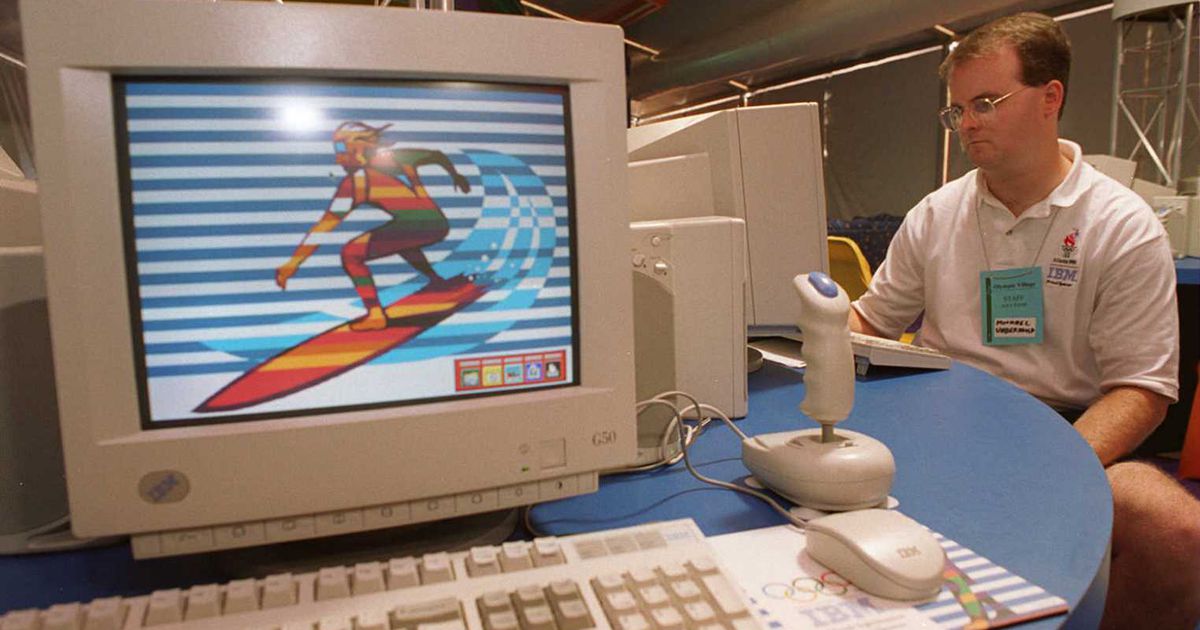 Before that, to help Atlanta’s bid, a Georgia Tech lab created a flight simulator experience allowing International Olympic Committee members to move a track ball and virtually fly over the city to see venues. In a larger booth, members could touch a 3D model of an Olympic village, triggering videos on screens surrounding them. 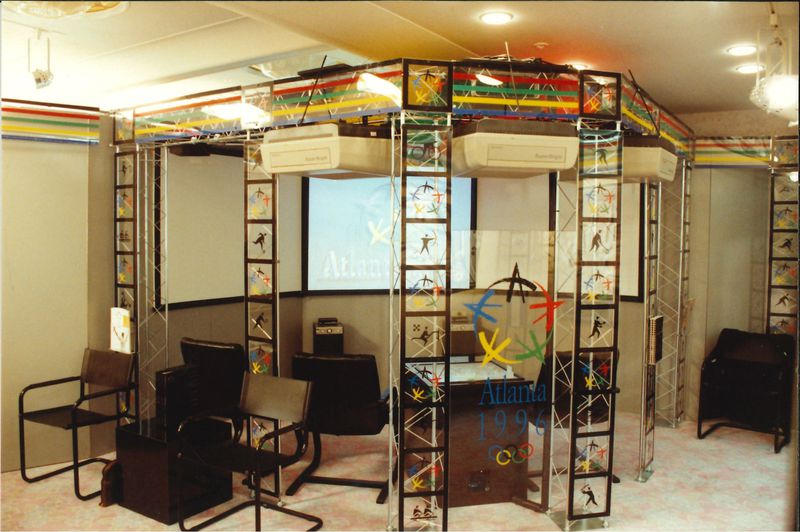 Mike Sinclair, who headed the lab, thinks “Southern hospitality was the major factor” for Atlanta snagging the Summer Olympics, but that it was the (relatively) high tech that made the committee “take us seriously.”

Atlanta saw Athens, Greece as its biggest competitor for the 1996 Centennial Olympic Games. “They were kind of looking backward at celebration of the 100-year anniversary, and we kind of got the feeling… that we should look forward,” Sinclair recalled. 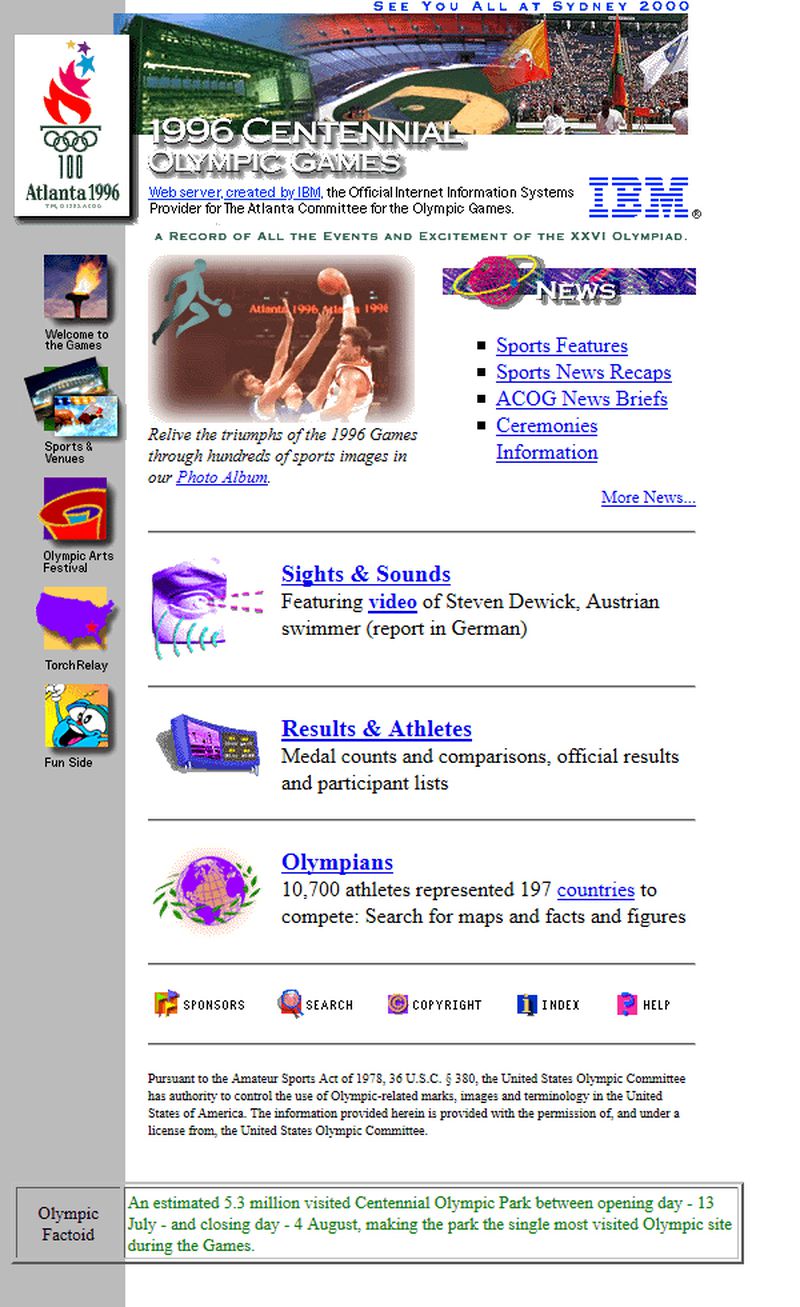 The 1996 Olympic Summer Games in Atlanta marked the first time that the Games had an official website. In July of 1996, only about 22% of the U.S. population was online, according to a Pew Research Center survey at the time, and bandwidths were very limited by today’s standards. (IBM / webdesignmuseum.org)

In July of 1996, the World Wide Web was just starting to reach households. Only about 22% of the U.S. population was online, according to a Pew Research Center survey at the time. AOL was the dominant online service and noisy modem dial-ups were the norm — at a speed of about 0.03 Mbps, compared with around 100 Mbps today.

“Websites weren’t really a thing” until a year or two before the ‘96 Olympics, recalled Lorrie Bilderback, the editor for the 1996 Games website.

Bilderback worked for IBM, and a banner across the top of the website proclaimed IBM “the Official Internet Information Systems Provider for The Atlanta Committee for the Olympic Games.”

The Atlanta Olympics website used small clip art-style graphics to guide users to results, athlete information, a “Photo Album” with hundreds of photos added daily, videos, details on the torch relay, and other features. In the months before the Olympics, the website also sold tickets to events. 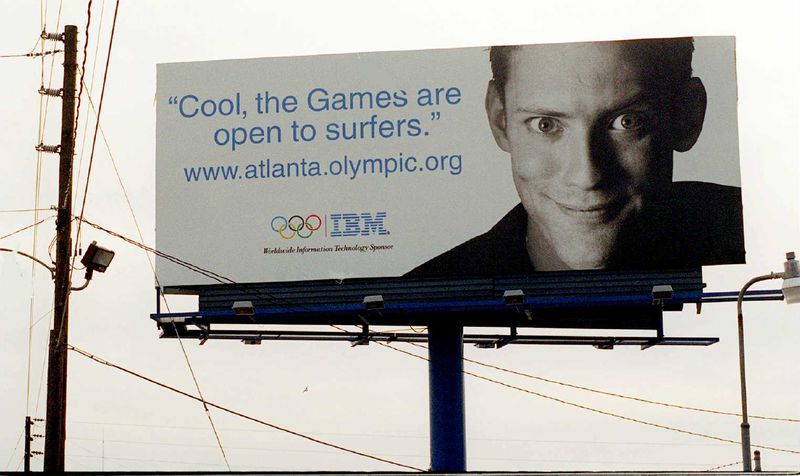 IBM touted itself “the Official Internet Information Systems Provider for The Atlanta Committee for the Olympic Games” on the official website and on billboards such as this one in Atlanta from December 1995. (Marlene Karas / AJC file)

But because bandwidth was so limited, “we had to make images as small as we could,” Bilderback said. Slow internet speeds also meant most visitors would not be able to watch video feeds without a long wait, if at all.

And in the lead up to the 1996 Games, IBM promoted the website in a decidedly low-tech way: with billboards around the city.

The BlackBerry hadn’t arrived yet, let alone the iPhone. Interactive kiosks, though, helped visitors find their way around.

Back then one of the exciting innovations was a “FanMail” messaging system that allowed people to send congratulatory messages or questions to athletes competing in the Games — and, if they were lucky, receive a response. Athletes could go to the “IBM Surf Shack” in the Olympic Village to log onto a computer and read their messages. 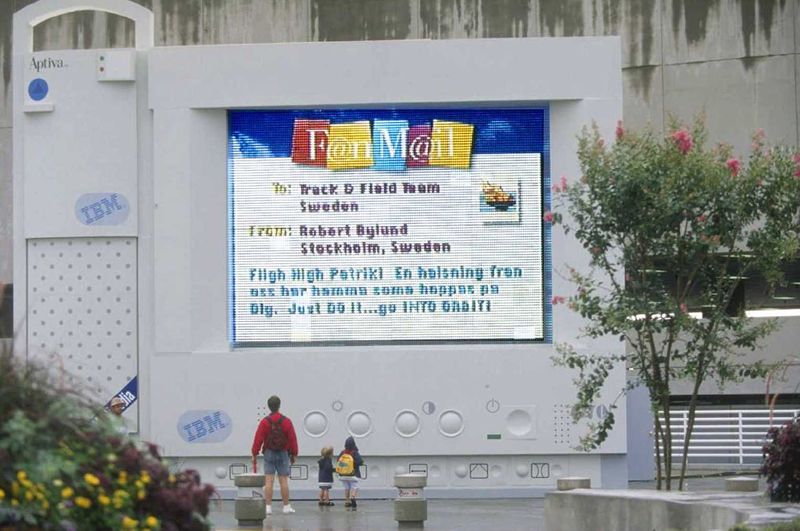 Among IBM’s innovations during the 1996 Summer Games was the “FanMail” messaging system, which allowed people to send congratulatory messages to the athletes — and, if they were lucky, receive a response. This large FanMail display was displayed outside the Georgia Dome. (Business Wire / 1996 file)

“In the early days of the internet, most of those athletes didn’t even have an email address,” recalled José Luis Iribarren, the IBM executive who was in charge of the website for the Atlanta Committee for the Olympic Games.

Some features were tacked onto the site in the final months before the Olympics. “We kept adding things along the way,” said Iribarren. “I don’t even know how did we manage to get to launch the website in time.”

Iribarren’s website team started with just three people in early 1995. It grew to about 64 people brought in to Atlanta from all over the world for the Games, along with a handful of people in Sudbury, Conn. running the central computer. 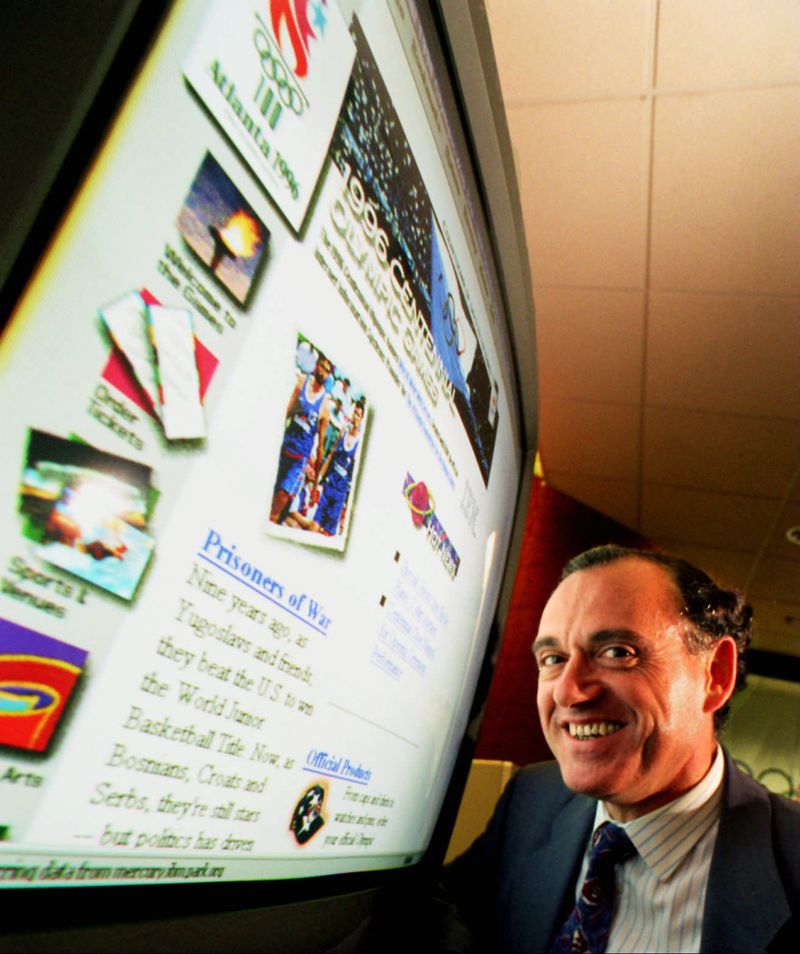 Jose-Luis Iribarren poses in front of the ACOG website developed by IBM in 1996. “We kept adding things along the way,” said Iribarren recently. “I don’t even know how did we manage to get to launch the website in time.” (Joey Ivansco / AJC file)

Throughout the 17 days of the 1996 Games, the official website attracted 190 million hits, equivalent to about 4.5 million visits, with about 1.25 million unique users.

By contrast, the 2016 Olympics in Rio de Janeiro drew 222 million visits and 100 million unique users to the NBC Olympics website, according to an IOC report. The IOC’s website got more than 26 million visits. NBC’s Facebook Live posts during the Rio Games generated more than 600 million views.

“In the early days of the internet, most of those athletes didn’t even have an email address.”

– José Luis Iribarren, former IBM executive who was in charge of the ACOG website in 1996

In the first few days of the 1996 Games, news agencies couldn’t quickly get results data, and systems to transmit biographical and event information to athletes, officials and journalists were plagued with ongoing problems. Organizers resorted to printing results on paper and delivering them by hand to media. USA Today famously ran a blank space in its newspaper where the results were supposed to appear.

The snafus trickled down to the website, where the vast majority of traffic was for event results.

Still, it was more than had been done before. Many who worked on the technology pitch for the Atlanta Games or the website look back with pride, and view it as a launching pad.

Two years after the 1996 Olympics, Sinclair was recruited to Microsoft in Seattle, where he is now a senior principal researcher exploring technologies like virtual reality and haptics.

But he said the Georgia Tech lab he led was approached by industries ranging from movies to medicine to art in the immediate wake of the Games, so much so that they had to turn away business. The lab, the Interactive Media Technology Center, or IMTC, still exists and is much bigger today.

The Olympics “just rolled into a huge, huge opportunity” for Georgia Tech and Atlanta, said Sinclair.

Today, Atlanta ranks 8th among U.S. and Canadian cities for the quantity and quality of its tech talent, and No. 1 in the Southeast, according to a recent analysis by the commercial real estate firm CBRE.

“It gave me a lot of opportunities…. to see places all over the world. But more than that, to develop the Web — the internet — into a full-fledged medium, from the inside,” said Iribarren, now retired in Spain.

Bilderback, the editor of the 1996 website, worked for IBM for 11 years and is now a digital marketing manager for consumer goods giant Reckitt.